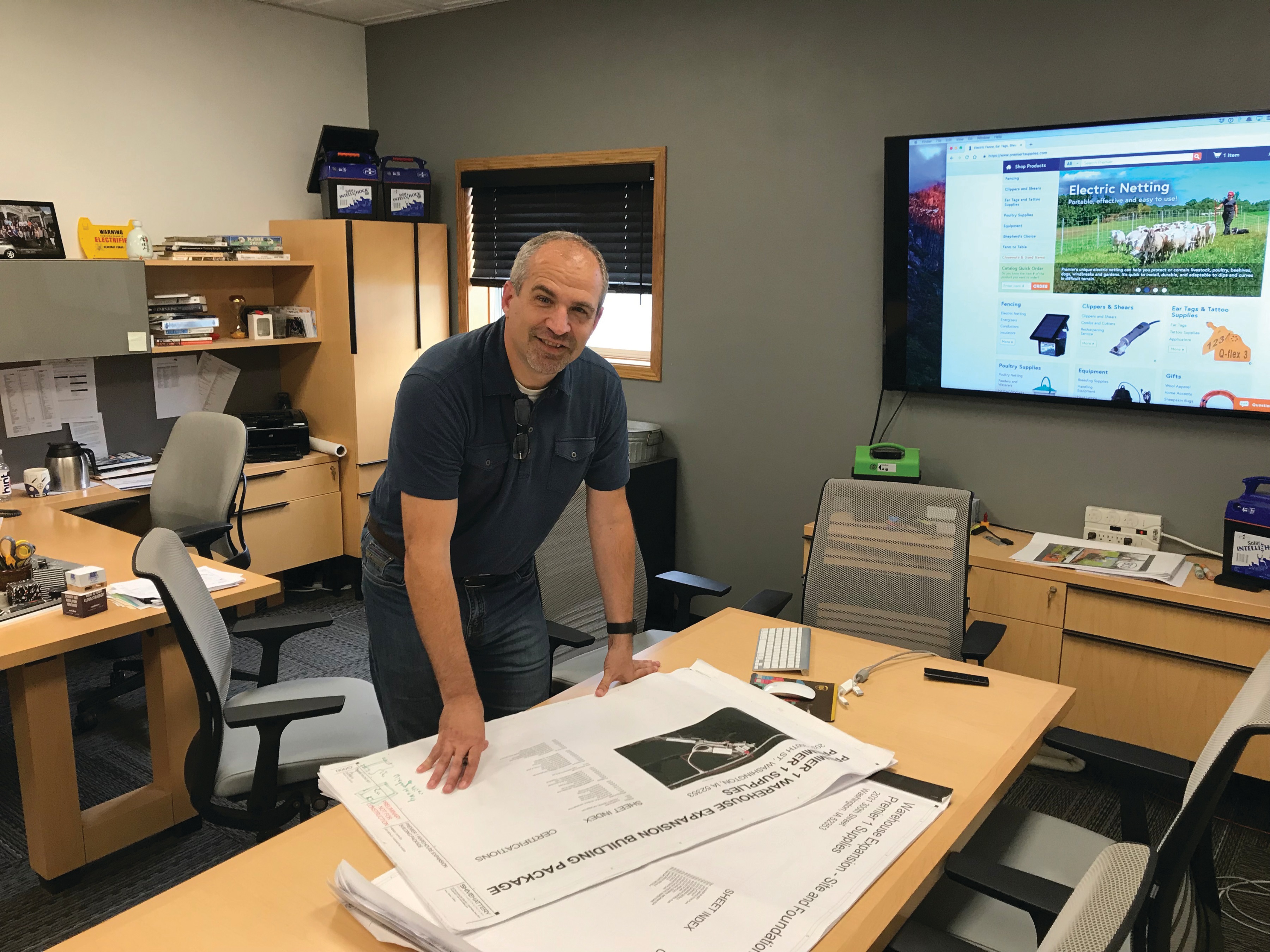 The project supports $6.5 million in associated capital investment, according to an IDOT press release, and will enable the sheep, goat and poultry equipment seller to add at least 25 employees.

Washington Economic Development Group Executive Director David Collins said the county’s Board of Supervisors and a private, yet unidentified party are expected to split the cost of the $1.2 million paving project, less the state grant. The supervisors have approved a resolution to pay the board’s share if the grant is received, but have not identified a funding source, Mr. Collins said.

Premier is an unlikely offshoot of a sheep-raising venture that began when Mr. Potratz returned to his family’s 160 hilly acres in 1977 after attending Ambassador College and managing its farm in England.

“I wanted to replicate some of what I had learned,” Mr. Potratz said. Unable to find specialized sheep handling equipment such as temporary fences in the U.S., he returned to England to procure them.

His presentation on British-style sheep production at an ISU event garnered enough interest to make him think about a side business importing sheep equipment.

“That was the basis of Premier becoming a company,” he recalled.

The “small, scattered” nature of the U.S. sheep industry, which had declined in the early 1980s from its peak of 15 million head to 6 million, made mail order a good fit.

“We slowly learned how to run a mail order business and put out a catalog,” said Mr. Potratz, who shipped out many early orders in burlap bags. “It didn’t really take off until 1991-’92 and ‘93,” when the addition of more equipment and shearing machines boosted sales.

Tying up the party line

In the early years, calls for catalog orders dismayed neighbors by monopolizing the rural party telephone line. Mr. Potratz finally bowed to the urging of his staff and wife, Jean, to install a toll-free phone line.

“I said ‘we’re doing OK, why go to that expense?’” he recalled. It was a similar story when the internet came along – Mr. Potratz saw no reason to put catalog listings online.

“I may be the guy with the big ideas around here, but I was wrong both times,” he cheerfully admits, crediting his wife, nephew and staff for persuading him to modernize.

Ms. Potratz has been “essential” to the business from the beginning, he said. “I’m a person with many ideas, and my enthusiasm sometimes exceeds our abilities. She’s been very thorough in making sure everything was thought through. She’s kept us from a lot of disasters.”

Ms. Potratz has also lent her “design eye” to the look of the catalog and website, and traveled with Mr. Potratz to visit suppliers all over the world.

Mr. Rothe, who grew up Indiana, landed his uncle as one of his first customers when he hung out his shingle as a web developer. When Mr. Potratz reluctantly said “let’s do something,” his nephew designed a website with a shopping cart, opening the door to Premier’s e-commerce future.

Some 60-70 percent of orders are now placed online via the website, which features product demonstration videos and reviews, but the company still distributes more than 250,000 catalogs per year. Those are focused on the overlapping categories of fencing, sheep and goats, and poultry, with backyard chicken growers an important customer constituency.

Catalogs and website listings on the Premier website, “written in Stan’s voice,” pull no punches. A description for a $41 New Zealand sheep crook, for example, calls the self-locking lever on the leg portion “its most important advantage,” and praises the “strong molded plastic heads” but not the “coated fiberglass shaft – which we would prefer to be a little larger, stronger and longer.”

Whether by webchat, phone calls or in-person visits, Premier thrives on customer contact.

“What we have to offer is real-world experience,” Mr. Rothe said. “Employees live on area farms, do chores in morning, come in here and talk to people, then go home and chore.”

Employees’ first-hand knowledge of everything from sheep, goat, hog, cattle and poultry raising to hay baling and gardening fits like a glove with Premier’s “educate-then-sell” business model.

When Premier’s warehouse addition is finished, it will have about 100,000 square feet of office, showroom, manufacturing and warehouse space under one roof. The existing warehouse is full to its 30-foot rafters with 2,000 different products, ranging from livestock ear tags to veterinary supplies to egg candlers.

Electrified fence netting is a major product category. Premier sells 250 variations of netting in many colors, heights and configurations, custom manufactured to its designs, for uses as varied as holding sheep, goats, chickens, turkeys and ducks, and keeping bears and feral pigs at bay.

Premier also raises 600 sheep, along with meat goats and poultry, on four small farms, but those operations are almost incidental to the mail order and e-commerce powerhouse the family has built through the years.

Mr. Rothe believes the improved facilities will set the stage for both sales volume and employment, now at 60, to double over time.

“When we started this, we had no vision of what it would become,” said Mr. Potratz, who enjoys spending more time tending sheep these days. “We remain very surprised.”   CBJ