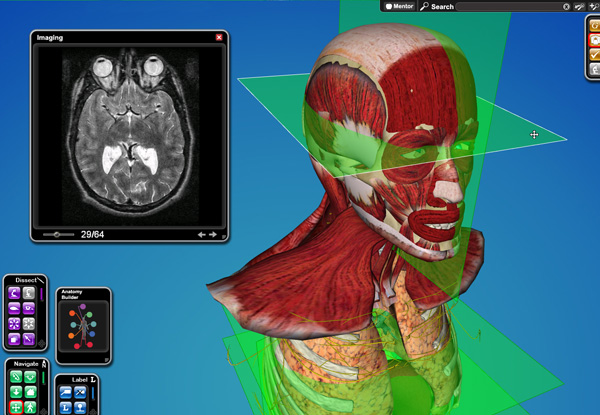 A Coralville-based business has developed a product that it is growing nationally and internationally to improve the traditional textbook-based K-12 curriculum.

The company is owned by a University of Iowa professor, but not associated with the university, said Rich Lineback, Cyber-Anatomy’s president. The owner received a call from a professor in the Middle East asking if he could develop a program for medical students to see the human body without having to use cadavers. The software, called Cyber-Anatomy MedVR, took four to five years to develop.

Dissecting cadavers and real animals can be expensive, Mr. Lineback noted. They decompose and compress, but with the Cyber-Anatomy software, the user can return and spend as much time as they want on the models.

Once Cyber-Anatomy MedVR was developed, the company began receiving requests for fetal pigs and frogs, Mr. Lineback said. That led to a focus on entering the K-12 market.

Cyber-Anatomy’s Cyber Science 3D software allows students to see more than 400 different models including animals, insects and human body parts in 3-D in the classroom without having to do any of the actual dissecting. With Cyber Science 3D, teachers and students can also look at all of the elements of the periodic table, add and remove electrons, protons and neutrons in 3-D.

The company recently announced that the United Arab Emirates Ministry of Education awarded it a contract to deploy the Cyber Science 3D software to 220 UAE schools. The software has also had recent large-scale adoptions in Russia, Brazil, Malaysia and Indonesia.

“It’s very compelling. You can read things in a textbook and still not understand, but an interactive 3-D model is very intuitive,” Mr. Lineback said.

The software is also available in traditional display for schools without 3-D equipment. A teacher can present the interactive models on a projector or smartboard while the students wear 3-D glasses and view the software.

“It appeals to students with a different learning style. Definitely what we have now appeals to today’s kids, it’s so engaging that kids will stick with it. It’s really a better way to learn,” Mr. Lineback said.

The user can click different options to remove different parts and see how they connect to other organs, turn the model 360 degrees and see labels of each part.

“It’s not a replacement for textbook learning, it’s a supplement. It’s learning aides that are really powerful,” Mr. Lineback said.

Models are available for human anatomy, biology, chemistry, earth science and mechanical engineering. The system allows teachers to customize lessons and presentations for use in the classrooms, and also enables students to conduct exercises or independent learning activities using the Internet on Windows or Macintosh devices.

“It’s a really great visualization of a topic that can be extremely difficult,” said Tom Nicknish, director of sales and marketing for Cyber-Anatomy.

Labels for all objects are available in multiple languages and in grade-appropriate (primary, intermediate, and secondary) format. The system supports the entry of user-defined labels and functional descriptions

“We did a large-market survey that found that 81 percent of teachers and librarians thought the content was very well aligned with the curriculum,” Mr. Lineback said.

The goal for future growth is to partner with a major book publisher, while continuing to expand nationally and internationally.

The company has recently partnered with zSpace to use Cyber-Anatomy software on its 3-D virtual holographic platform.

Mr. Lineback previously worked for technology companies in the Silicon Valley to the Corridor and was a vice president at Pearson in Iowa City for seven to eight years before joining Cyber-Anatomy.

Cyber-Anatomy moved from its Iowa City location on South Gilbert Street, to a larger space at 805 Second St., Ste. 1, Coralville, about a month ago. The building previously housed Hawkeye Audio/Visual. Cyber-Anatomy was started in 2007.