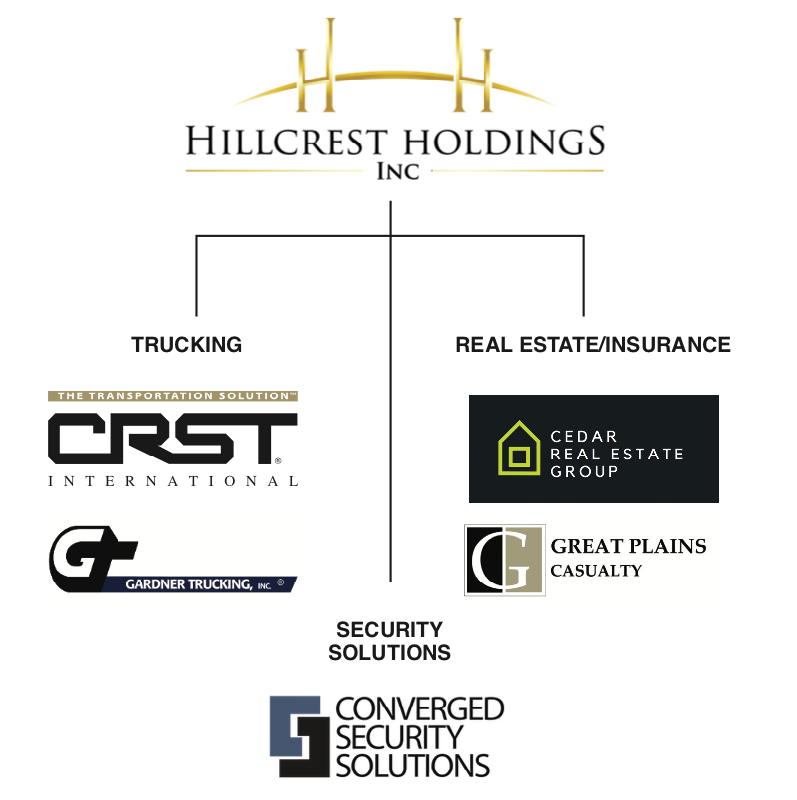 The line between cybersecurity and physical security is thinning, and could eventually become irrelevant.

That’s part of the investment thesis that convinced the family holding company for CRST International to take its first big step toward diversification outside the trucking industry.

Hillcrest Holdings is the holding company through which the Smith family of Cedar Rapids owns CRST, and has invested in companies such as Gardner Trucking, Great Plains Casualty and a real estate port- folio of buildings housing CRST facilities.

Hillcrest announced Oct. 2 that it has taken a majority stake in Converged Security Solutions (CSS), a new company formed by merging a Virginia-based IT consulting and technology firm that specializes in cybersecurity with another Virginia firm that installs and monitors electronic security systems for property.

CSS is now able to offer physical security, IT and cybersecurity services in a one- stop shop, including some services that neither company could provide on its own.

If a client’s employee, for instance, is shown logged into a network in one place and swiping a security badge through an access control device at another, it could potentially trigger security alerts. If a security camera, alarm or lock is controlled via the internet, CSS will have better expertise to protect it from hacking, or to detect hacking if it occurs.

“We’re looking to grow delivery of  these services to mid-sized companies across the country,” said Bob Friedenberg, CEO of the new company. He said CSS wants to make such “managed services” more cost-effective to the middle market, and can perform the vast majority of its services and operations remotely.

The new company also brings a wealth of experience meeting the stringent security requirements of federal agencies through its IT side, Evolver. Through the merger, the company will be able to bring those best practices to commercial clients facing growing threats to their security.

One of the capabilities CSS brings to the market that may not get much attention is Evolver’s status as a nationally recognized leader in risk quantification using the FAIR model; it is also ISO 27001 (security) certified.

Risk quantification can help companies hone in on their areas of vulnerability, and provide the economic justification for investments needed to address their security risks.

The value of the merger deal and of CRST’s investment in it was not disclosed. On a pro-forma basis, the combined companies have annual revenue over $50 million. However, nobody expects the company to remain that size for long. Merger partner eVigilant has experienced 200 percent growth over the last three years, making the Inc. 500 list of America’s fastest-growing companies.

Although the merged companies will already be able to serve a larger market, it’s also quite likely CSS will grow through additional acquisitions or just plain investment.

“It’s a platform investment,” said Ian Smith, vice president of Hillcrest Holdings. “We’re looking for businesses that could be an attractive addition to that platform.”

Mr. Friedenberg was the original spark for the deal. He had previously been a key player in a similar merger that combined cyber and physical security capabilities, and saw the benefits it brought to the market. He began looking around for IT/cybersecurity and physical security companies to com- bine, honing in on Evolver and eVigilant.

Mr. Friedenberg had contacts at Akoya Capital, the investment firm that bought part of the deal, and connections with Hillcrest Holdings.

Akoya “helped me refine my thoughts put together a more robust value proposition,” Mr. Friedenberg said. “We were lucky enough to run into Jonathan [Howgate, vice president] and Ian at Hillcrest Holdings. Relatively quickly, they agreed they would be the majority investor.”

Mr. Smith said Hillcrest Holdings was working with Akoya because of its deal flow, sector expertise and excellent relationships with experienced operators in the security field. Hillcrest liked the investment thesis of combining physical and cybersecurity in one business, creating a whole that is worth more than the sum of its parts, he added.

“The growth trajectory of that market [security] is the appeal,” Mr. Smith said. “There is high growth, but it’s intensely competitive.”

CSS is located in Reston, Virginia, Evolver’s home turf, while eVigiliant will continue to host operations in Lorton, Virginia, where it’s been based. CSS has smaller offices in Boston, Denver and San Francisco, but will be a nationwide service provider.

A major focus of the company will be the delivery of integrated physical and cybersecurity in a managed services model, including assessment of security needs, remediation of threats and remote monitoring of IT and physical security. The managed services model “sells well to the C-suite,” Mr. Friedenberg said, because of the strong value it provides.

“There is no reason a company in the D.C. area couldn’t be monitoring security anywhere in the country,” said Mr. How- gate, who leads new business development efforts for Hillcrest Holdings.

The integration of the two companies, now at about seven weeks, is going well, according to Mr. Friedenberg, with a good amount of energy and engagement. While it’s too early to issue predictions, Hillcrest Holdings believes in the big bet it’s making on CSS.

He added that Hillcrest is highly interested in more diversification, and since the Corridor is its home, it has a preference for investing in this region as well.