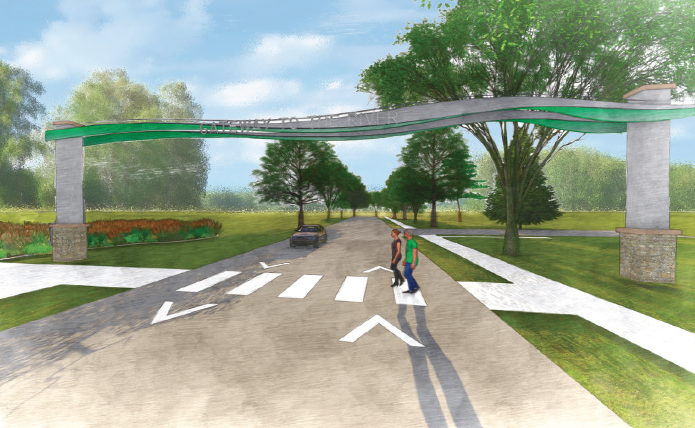 This Gateway to the River arch, designed for O Avenue west of Ellis Boulevard NW, is one of the many aesthetic features being built in conjunction with the city’s flood control system. CREDIT CITY OF CEDAR RAPIDS

Coordinating the development a $750 million flood control system that will prevent a 2008-like catastrophe has led to some unlikely insights for Rob Davis, Cedar Rapids’ flood control manager.

“I think engineers can design anything to work,” Mr. Davis, a veteran civil engineer, said recently. “The real success of this project is not going to be how it works when there’s a flood – in my mind, that should be a given.”

The ultimate success of the project as Mr. Davis sees it will instead be how it works during the 99 percent of the time when the city is not under threat.

“This is the part that excites me as flood control manager – making things that people can use every day on the floodwalls and flood gates,” he explained. “We’re not going to be using it as a flood control system every day, so you want to do more things that are community-based.”

Mr. Davis and his colleagues in the Department of Public Works now find themselves sweating the details – how to make the project attractive, how to make it interactive, how to save on construction and how to minimize ongoing maintenance costs.

“As we pursue measures to protect our community from floods, we are committed to building a system that supports our neighborhoods’ quality of life,” City Manager Jeff Pomeranz said. “Walking trails, greenways and memorials are intentionally being woven into the engineering design – we want a system that enhances daily life for our residents, not just protects them during natural disasters.”

The first section of the flood control system known as the Sinclair Levee was dedicated on a cold day last December. Nearly one-half-mile long, it protects the lowest-lying area of the city from the Cedar River in an area that once housed the enormous Sinclair meatpacking plant.

The flood control system is one of the most ambitious engineering projects in the history of Cedar Rapids, on the order of building Interstate 380 through the heart of the city in the 1970s. Although slowed by the lack of a federal funding commitment, it will eventually consist of a 7.5-mile system of levees, gates and pumps, averaging about 15 feet in height. About 20 percent of the system will be removable walls or gates, including some that can be raised or lowered from below ground.

The new Sinclair Levee is up to 23 feet tall in spots and up to 130 feet wide at the base. It’s also a good example of the multiple-use benefits Mr. Davis and the city’s public works team are trying to achieve. A recreational trail runs along the top of the levee, which has such a gradual slope that it will also serve as a kind of natural amphitheatre for concerts by Maroon 5 and Kelly Clarkson during this summer’s NewBo Evolve festival.

Nearby, a huge stormwater detention basin constructed as part of the project will also serve a dual purpose. While its main calling is to hold stormwater runoff until it can be pumped into the river, part of it will also be a paved basin for storing snow plowed from downtown streets. By letting the snow melt in a paved basin, the city can remove street debris and other impurities it leaves behind rather than letting it all run into the river.

Several parks and monument areas are planned along the levee system, including Osborne Park, Kuba Park, Masaryk Park and a rock to commemorate the former Sinclair meatpacking plant.

Development of the flood protection system has more recently shifted to a $7.5 million project to build a levee between the recently closed regional landfill site and Czech Village on the west side of the river.

That area will also feature one of the largest parts of an expansive greenway system that is being created as part of the flood control project. A city park covering some 39 acres is being made from blocks and blocks of land where flooded houses were removed. Plans also include a kayak and canoe landing near Czech Village to improve access to the river.

An important cost-saving decision recently made in that area was to have Bowling Street go over the levee instead of building a more costly floodgate that would have required more ongoing maintenance and operations costs. Plans for a flood gate at the National Czech & Slovak Museum & Library along the river have been similarly replaced by plans for a levee that will be visually enhanced by a series of terraces at considerably less expense.

“It’s a dynamic design, and as we go through it we will challenge ourselves on each segment to do it better,” Mr. Davis said.

A surprising percentage of the cost and resources going into the project will be literally invisible to the public, with strong pilings and levee foundations located underground. The relocation of utility lines will minimize the number of places they have to go through the levee, potentially weakening it.

“Some of it is to support the weight,” Mr. Davis said. “You really need a lot of underground support to hold that [flood] wall up, and where you don’t have a wall and just have an earthen levee, you need to go down a lot so the water can’t seep underneath it.”

One of the initial projects of which Mr. Davis is most proud was last year’s installation of a gate structure on a nine-foot-diameter storm sewer pipe that drains much of the downtown area’s surface water into the Cedar River.

The gate will prevent massive water backups from the river into storm sewers – the reason Mercy Medical Center in Cedar Rapids had to be evacuated and why crews had to place precast concrete cylinders filled with sandbags atop dozens of manholes in low-lying areas.

About $3.5 million was spent recently to relocate and consolidate city utilities in the Czech Village area and another $3 million is going to the relocation of a 36-inch water main that serves about one-fourth of the city as part of a flood protection project specifically for the Quaker Oats plant in downtown Cedar Rapids.

“It’s maybe not as satisfying as walking along the top of the levee,” Mr. Davis said. “Nobody really enjoys a relocated utility.”

Once the city completes flood control structures in the lowest-lying areas of Czech Village and New Bohemia, the rest of the system will be a more “level playing field,” Mr. Davis said. The city will then be able to shift its attention to areas where it’s most ready to proceed or has grants that need to be spent.

“The one product that makes sense to start now, in August, will be removing and raising the Quaker Oats flood wall by eight feet,” Mr. Davis said. The company is currently completing some of its own preparations to ready the site of the nation’s largest cereal plant for the project.

Even with the phased construction planned due to funding limitations, the project is providing a stimulus to the local economy, bringing in workers from other cities and employing some local contractors. Although some of the early contracts have gone to companies from Davenport and Illinois, others have gone to Rathje Construction of Marion, and WRH Inc. in Amana.