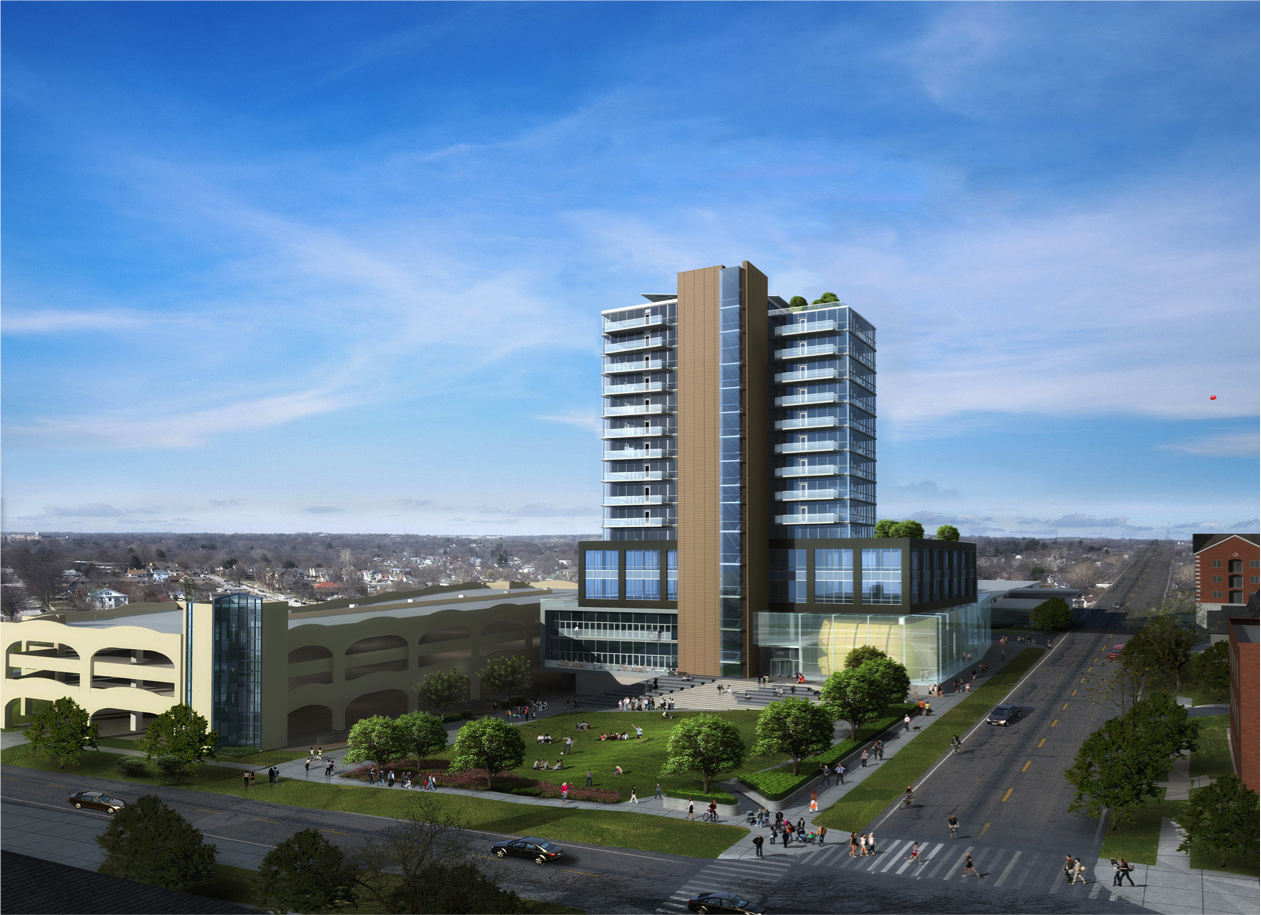 A rendering of the coming Chauncey tower, shown here from Gilbert and Washington streets. The building will feature retail space, Class A office space, a two-screen movie theatre, a boutique hotel and condominiums. IMAGE/ROHRBACH ASSOCIATES

At the ceremonial groundbreaking for The Chauncey, a mixed-use condominium tower to be completed in 2019, guests gathered in a tent set up for the snowy event in downtown Iowa City, most of whom bubbled with excitement.

With the prospect ahead of a bowling alley, movie theatre and other commercial niceties like a cafe and office space – all supported by underground parking – the project would appear to be a developmental boon.

Yet outside the tent, The Chauncey has been the focus of contentious debate for more than four years, with concerns ranging from historic preservation and neighborhood aesthetics to the city’s use of tax increment financing for the project.

“I think the main sentiment of the day I had engraved on the handle of the shovels, which is the word ‘finally,’” Mr. Moen told a group of cheering supporters during the Dec. 11 event.

The building will include 43,000 square feet of retail space throughout its first two floors, including an art gallery and a two-screen, 250-seat movie theater to be operated by FilmScene, an independent theater currently located on the Iowa City Ped Mall. On the third and fourth floors will be 38,000 square feet of Class A office space, with 35 hotel rooms and 66 condominiums spanning the top 11 floors.

Mr. Moen said Brunswick is serving as the consultant for the bowling alley, and has recommended the restaurant and alley be managed by the same party. He said they will be locally owned and operated, and that he’s in contact with a prospective owner.

The residential component of the building at College and Gilbert streets is expected to be complete by late February 2019, while the bowling alley and movie theater will likely take an additional four to six months to finish.

Tom Markus, former city manager for Iowa City who recently accepted a position in Kansas, praised Mr. Moen for the pending project, as well as other additions to the downtown by Mr. Moen, including the Park@201 Building and the Plaza Towers Condos.

“He has a great vision for this community,” Mr. Markus said at the event. “He does care about this community, and I would say to you that the buildings that he’s built, including this one, at some point in the future are going to be the iconic buildings of Iowa City. They will be the impressive parts of the skyline of this community.”

Other city representatives were not so enthusiastic. Among the guests in attendance was Iowa City Mayor Jim Throgmorton, who voted against the city’s development agreement for The Chauncey. Unlike former Mayor Matt Hayek, Mr. Throgmorton did not speak publicly at the groundbreaking, and declined comment after the event, saying only “The project is underway.”

Formal opposition to The Chauncey dates back at least to 2013, when a group called the Iowa Coalition Against the Shadow sought to rezone land designated for the tower.

In January, an Iowa appellate judge affirmed a lower-court ruling that city council and staff members were justified in granting a zoning change for the project, contrary to the claim of plaintiff and private attorney Rockne Cole, who was elected to the city council prior to the case’s appeal.

Less than two weeks later, representatives of nearby Trinity Episcopal Church reached a settlement with the city, Mr. Moen and Rohrbach Associates on a separate lawsuit, which also challenged the project over zoning rules. Under the agreement, Chauncey LLC promised to make a “substantial” donation to Shelter House in Iowa City over three years, starting this year.

The Chauncey has also been the subject of debate due to its use of TIF, or tax increment financing. Of the building’s estimated $56 million cost, about $12.09 million will be paid for using TIF, which captures the anticipated growth in property tax values over the course of the designated district’s 25-year lifespan.

When the four-year construction loan taken out by Iowa City matures, the newly generated property taxes will be used to pay off project bonds sold by the city to cover the building’s initial financing gap.

Once the building is completed, the developer will annually pay about $460,000 in property taxes, potentially through the year 2038, after which the full value of the property’s taxes will be distributed to other taxing bodies. Wendy Ford, economic development coordinator for the city, said it’s likely the TIF will be retired ahead of schedule once the full value is recovered.

For economists like Dave Swenson of Iowa State University, economic development TIFs still pose a threat to taxing bodies outside city hall. In a summary prepared for state lawmakers, Mr. Swenson wrote that that between 1997-2006, more than a fourth of real statewide property valuation growth had been diverted to TIF activity.

In that time period, 88 percent of all property tax valuation growth in Iowa in medium-sized cities – defined as those with 10,000-49,999 residents – was accrued in TIF increments.

Those diverted property tax revenues impact other taxing bodies such as school districts and county governments, he said. According to a 2011 case study by the Iowa Policy Project, about 15 percent of Johnson County’s urban tax base, or nearly $760 million worth of taxable property, is claimed by TIF.

“With regard to economic development TIFs, where there is not a clear market failure, there is no justification for the city to divert other governments’ property tax revenues,” Mr. Swenson wrote.

Mr. Throgmorton has pushed to amend the city’s TIF policy, most recently before the city’s Economic Development committee.

During the city council’s Dec. 13 meeting, Mr. Throgmorton said he’d like the council to consider adding language that separately addresses TIF use in the downtown and Riverfront Crossings districts, where construction demand is stronger than the city’s rural areas.

“The essence of our community’s conflict over TIF has to do with how TIF has been used and might be used in the downtown and Riverfront Crossings area, not so much out in the periphery,” Mr. Throgmorton said.

When the city council green-lit The Chauncey in 2015, the project’s entertainment amenities largely drove its support, Ms. Mims said. If increasing the city’s potential tax base qualifies as a public good, however, TIF will likely be used more broadly.

Ms. Mims said the committee has requested city staff collect feedback from developers and others about possible TIF policy changes to be presented at the committee’s February meeting.