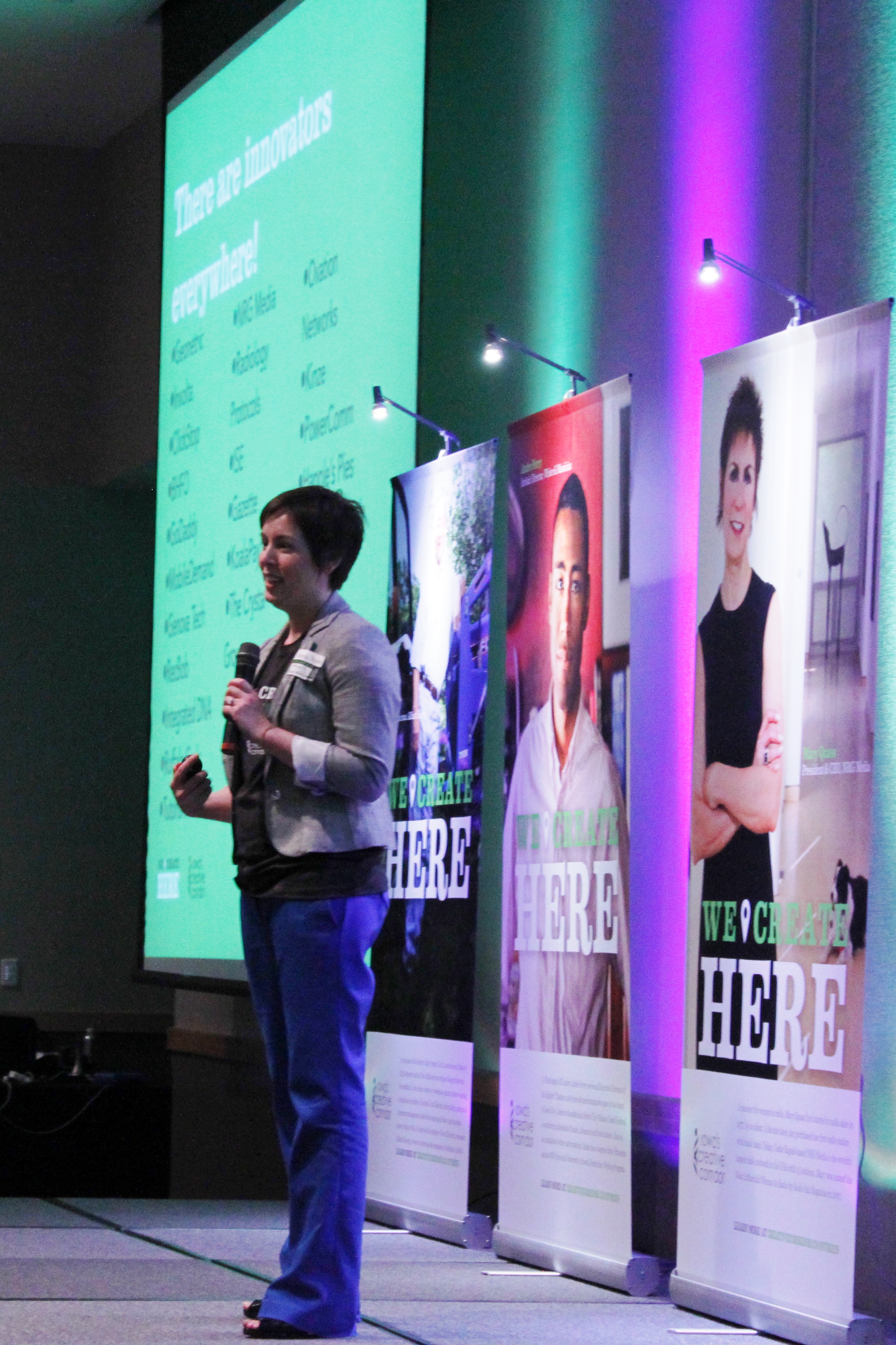 CORRIDOR—Before he founded the Collins Radio Co. in Cedar Rapids, Arthur Collins  was just a kid with a hobby.

The young Mr. Collins had been tinkering with radio equipment since the age of 9. By the time he was 15, he had built one of the most sophisticated radios in the world. When the National Geographic Society sent an expedition to explore the North Pole, Mr. Collins was the only radio enthusiast who could pick up the distant radio signal. He would transcribe the team’s reports daily before riding his bicycle downtown to telegraph the reports to Washington, D.C.

“Arthur Collins was an entrepreneur, an innovator and a creator, but most importantly, he was a kid with passion from the Corridor,” said Andy Stoll, a founder of Seed Here Studio, which is coordinating the Creative Corridor Project’s new initiative.

He told the story to an audience of about 300 people, who attended the Creative Corridor Project Launch event on April 19 at the Hotel at Kirkwood. The Creative Corridor regional branding taskforce unveiled ways it hopes to redefine the region and make it one of the top-performing places in the nation.

As part of that effort, Creative Corridor organizers shared the story of the young Mr. Collins, as well as their vision to find more stories like it for what is known as the Creative Corridor Project. Storytelling will be a key part of how the seven-county region can embrace and celebrate its identity, organizers said.

“What would you say to a young Art Collins if he was sitting next to you right now?” said Amanda Styron, a founder of Seed Here and the project lead, adding that it is important to support and encourage entrepreneurs and creative professionals residing in the area. “It’s really our answer, as a region, that’s going to determine how successful we are as a community.”

Business and community leaders in February 2012 announced an effort to brand the Cedar Rapids/Iowa City region as Iowa’s Creative Corridor. The leadership group had conducted research and strategic planning and hired North Star Destination Strategies of Nashville, Tenn., to create the brand name. The company provided a 200-plus-page strategic plan that included implementation details. The firm has helped more than 100 communities and regions to rebrand and market themselves.

The luncheon event April 19 unveiled a new implementation step: four programs designed to engage creative citizens, which together make up the Creative Corridor Project. The four initial programs focus on the theme “we create here:”

Branding: Web buttons with the new “we create here” logo are available online at http://creativecorridor.co.

Storytelling: Each week, a new story about a creative community member will be featured on the website and will be free for other organizations to share and use.

Events digest: A weekly email update of upcoming events for entrepreneurs and creative and business professionals is available at the website.

Creative Week: The week of Oct. 19 will feature dozens of events focused on the themes of create, innovate, build, connect, share and learn. An announcement of headline events for Creative Week is expected this summer, with a full lineup to come in the fall.

“After the flood, we noticed that people, rightly so, focused on their homes, their neighborhoods, their churches – local, local, local,” he said. “I started wondering, who was going to care about the Corridor?”

The idea of creativity is not limited to the arts, but includes business innovations, food and farming culture and education projects, organizers said.

“The reality is, when you think about being creative, everyone is creative in some form or fashion,” said John Lohman, publisher of the Corridor Business Journal and a chair of the task force.

To view videos from the luncheon and for more information, visit http://creativecorridor.co.

The Creative Corridor branding initiative originated from The Path to Regional Excellence meeting held Nov. 3, 2009, at Kirkwood Community College. It was hosted by the Corridor Business Alliance (CBA) and Corridor2020. The meeting attracted more than 350 community and business leaders and featured Michael Langley, a regional planning expert, who discussed the qualities of an effective region.

The CBA decided the regional event was successful and decided to use the momentum and success to continue its work. The CBA hired Mr. Langley to return to the region and conduct a strategic planning session on Dec. 18, 2009. More than 30 regional leaders participated in the session.

The strategic planning session resulted in three strategic initiatives for the region that began in January 2010. The branding initiative was one of the three initiatives.
The process cost $125,000, which was paid for by CBA members.