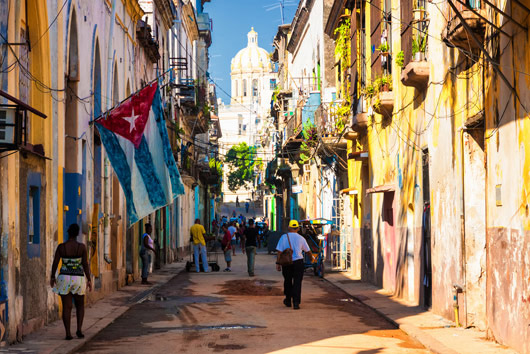 Following recent efforts by President Barack Obama to loosen trade and travel regulations between the United States and Cuba, Iowa’s public universities and local chambers of commerce are taking steps to establish inroads with the island nation.

The Obama administration announced plans to normalize foreign relations with Cuba in December 2014, and federal regulators have since announced a series of changes aimed at easing the economic embargo.

In March, the U.S. Departments of Treasury and Commerce published amendments to their respective regulations expanding Cuba’s and Cuban nationals’ access to U.S. financial institutions. Those changes followed plans announced by the U.S. Transportation Department earlier this year to allow scheduled passenger and cargo flights between the two countries.

In Iowa, the “Cuban thaw” has inspired interest among travel groups eager to cash in. Among them is Chamber Explorations, a California-based travel agency that coordinates trips abroad through chambers of commerce, including the Iowa City Area Chamber of Commerce, which plans take a group to Cuba for one week in October.

Rebecca Neades is the vice president of public policy for the chamber, which has led previous trips to India, Ireland and China. The visits are focused on cultural exploration, she said, although visitors have also tried to forge business connections while abroad.

October’s trip will include a visit to a tobacco farm, a tour through historic Havana, and stops at world heritage sites endorsed by UNESCO – the same cultural group under the United Nations that named Iowa City a “City of Literature” in 2008.

Ms. Neades said that although local business owners have yet to formally express interest in breaking into the Cuban market, the chamber will continue to foster relations there.

“We’ve got some folks that are trying to figure it out and decide if the think the timing is right,” Ms. Neades said. “The opening of Cuba to … exports from Iowa would be a tremendous opportunity for our state and our economy, so we can see there’s a strong benefit.”

Engage Cuba and the U.S. Agriculture Coalition for Cuba (USACC) said U.S. soybean and corn exports to Cuba have decreased dramatically in recent years, and attributed the decline to a federal law that prevents U.S. exporters from extending private credit to Cuba.

“Soybeans are not only a leading revenue source of Iowa’s agriculture sector, but a major economic driver for the entire state,” James Williams, president of Engage Cuba, said in statement. “By fighting to pass legislation to remove restrictions on extending credit for agricultural exports, Engage Cuba is working to ensure that Iowa farmers are able to take full advantage of Cuba’s growing agriculture markets.”

Engage Cuba, a self-identified bipartisan nonprofit, is comprised of partners such as Procter & Gamble, Honeywell, Choice Hotels and others, and earlier this month, announced the establishment of the Engage Cuba Iowa State Council. Members include Iowa Secretary of Agriculture Bill Northey, Farzad Moussavi, director of Global Programs at the University of Northern Iowa, and Dimy Doresca, director of the University of Iowa Institute for International Business, among about 30 others.

The council met June 3 to discuss strategies for showcasing the potential of increased trade relations, which will likely revolve around raw agricultural products as well as farm machinery.

“We know Cuba is using 1960s machines from the former Soviet Union in that culture,” Mr. Doresca said. “So they would love to receive modernized agricultural machinery.”

In addition to the ag sector, Mr. Doresca said the council will reach out to local stakeholders in renewable energy, such as biodiesel, solar and wind, as well as investors in health care technology.

“Cuba is very advanced in medicine, but they do not have the appropriate technology … to allow it to work,” he said. “We think that by showing to Iowa business people what they can gain when engaging in trade with Cuba, they will also really push their local officials and representatives [to] understand the importance of normal relations with Cuba.”

The council will launch a grassroots campaign appealing to Iowa businesses in the future, but Mr. Doresca said his immediate efforts are focused on an upcoming study-abroad program that will place about a dozen students in Cuba for three weeks, starting in December.

The International Entrepreneurship and Culture Program, which previously sent students to Belize, will be coordinated with UI Study Abroad Associate Director Autumn Tallman, who visited Cuba with Mr. Doresca last fall. The pair met with community and business leaders in areas such as the mountainous town of Viñales, known for its coffee and tobacco production, where they looked into establishing possible educational programming.

“That’s an area where we have also seen a proliferation of bed and breakfast-type setups to accommodate a rise in tourism,” Ms. Tallman said. “So that has opened up an interesting opportunity for students.”

Participating students will be expected to complete market research on behalf of Iowa businesses considering an expansion into Cuba – a project that will include a substantial time investment stateside both before and after the trip, Ms. Tallman said. A list of participating students is still being finalized, though it’s expected to include a mix of undergraduate and graduate students with a strong interest in commerce, in addition to those outside the UI’s Tippie College of Business.