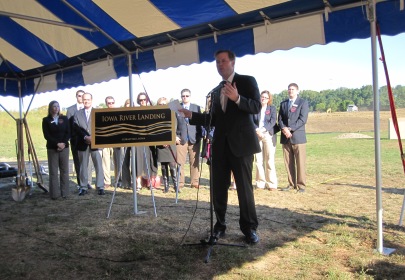 It’s no longer a rumor. Von Maur will be an anchor tenant at the Iowa River Landing District in Coralville.

Company and area officials made the announcement at a ceremony this morning on an undeveloped parcel of land near the Coralville Marriott. The ceremony served as a groundbreaking former University of Iowa wrestler Lincoln McIlravy’s extended-stay hotel, which will be a few doors west of the Marriott. The hotel is expected to be complete in the fall of 2012.

Von Maur’s new store in the IRL district will be 80,000 square feet, compared to the existing 52,970 square feet at its Sycamore Mall location in Iowa City.