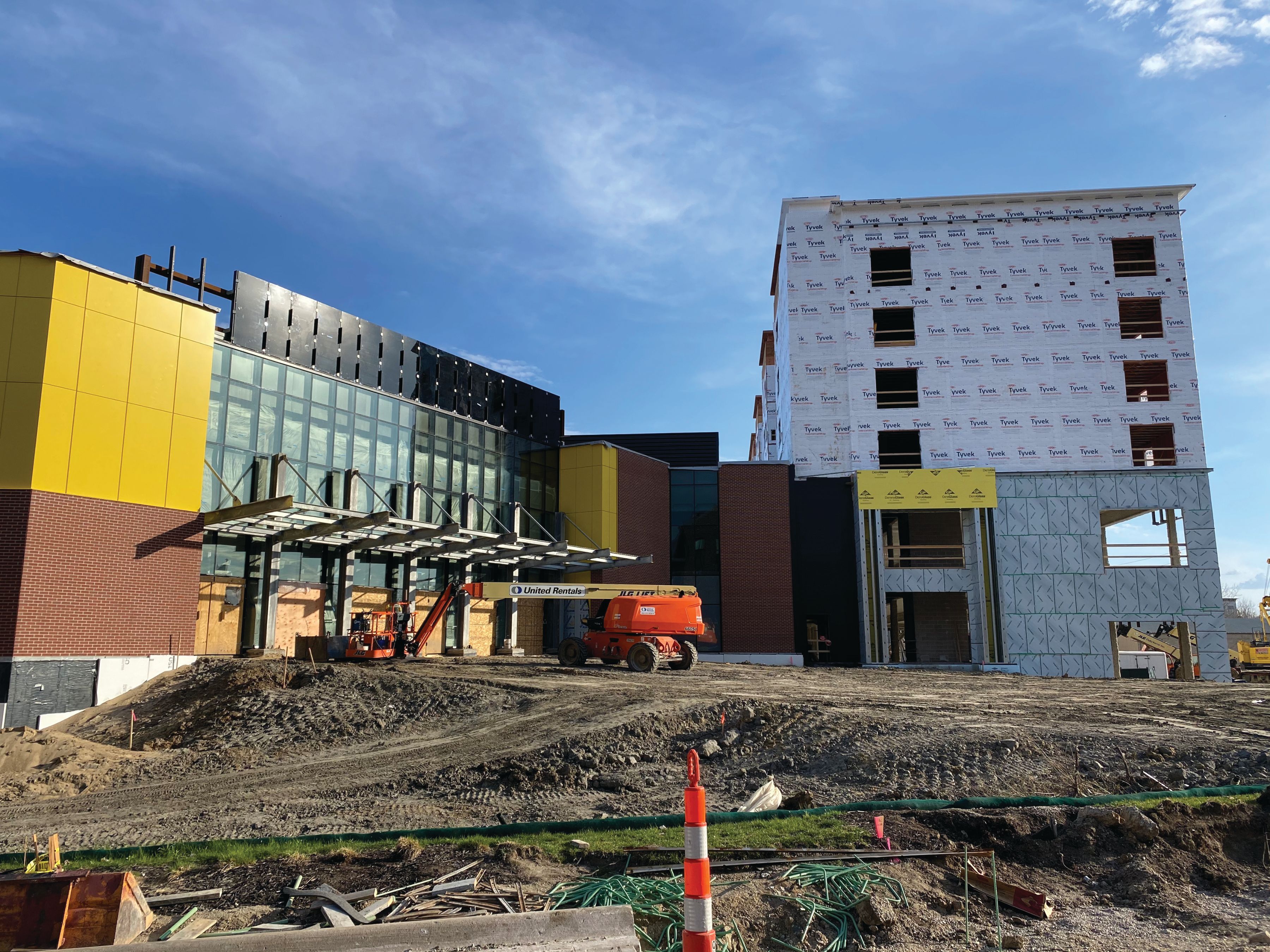 Driving past the bustling Xtream Arena construction site in Coralville’s Iowa River Landing, it’s difficult to believe there’s a pandemic grinding vast sectors of the economy to a halt.

An average of 125 workers still report to work on the $50 million project each day, fanning out to install lighting and seating, lay carpet and landscape the outdoors, among other jobs still on the list before the 5,100-seat arena and fieldhouse can open to the public.

It looks like business as usual and, according to Randy Clarahan, market executive for Mortenson’s Iowa office, in many ways it is. But even as most commercial construction projects move forward amid the COVID-19 crisis, it is changing the way workers do their jobs, disrupting supply chains and injecting a sense of uncertainty about the health of the industry after the project backlogs are cleared.

“The impact COVID-19 has had for us so far are mainly labor and supply challenges,” said Mr. Clarahan, adding the Mortenson-led project is still on pace for a September opening, despite new procedures intended to keep workers safe and some minor supply issues, including delayed delivery of seat backs from a Michigan manufacturer that closed several weeks ago.

“We have been blessed and fortunate to have kept our job sites safe and clean … And I’m happy to say there hasn’t been a single positive [COVID-19] case on the job site, not just at Xtream Arena, but across our other project sites,” he added.

The nature of construction can mean teams work together in tight quarters, and unfinished spaces on job sites can make hand-washing less available than in office or retail environments.

Yet so far, there have been few outbreaks making headlines at Iowa construction sites. Work on the $322 million Interstate 74 bridge between Moline, Illinois and Bettendorf was suspended for a week late last month after one contractor employee tested positive for COVID-19, while a construction project at a hospital in Spirit Lake came to a temporary halt last week when three contractors tested positive.

Closer to home, a construction worker involved with improvements at West High School in Iowa City self-reported being infected with the virus last Tuesday, leading to a 72-hour shutdown to allow the building to be cleaned and sanitized.

While some states like Washington, Pennsylvania and Michigan have ordered construction activity to cease temporarily as part of their stay-at-home orders, others have deemed such work “essential.” Iowa has gone a third way, not placing construction workers into the essential category, but also not placing any formal halts or restrictions on their activity.

Like most Corridor construction firms, Mr. Clarahan said Mortenson has taken it upon itself to implement safety measures, including social distancing. The company provides workers with respirator masks and face shields in situations where that is not possible, has set up mobile hygiene centers and is working to minimize choke points.

In addition, the city of Coralville is conducting all inspections after hours to minimize contact and tours of the facility have been stopped – although the curious can still monitor construction via webcam.

“When this happened, my first concern was about our craft workers and their safety because they are busy, and people get distracted,” he said. “But what’s happened, at least for Mortenson, is our sites are safer than they were a year ago and our labor numbers are up … and that’s a tribute to people paying attention.”

That’s not to say there haven’t been some scares, he added, with some subcontractors having to thin ranks in a few instances due to crew members’ friends or family members testing positive.

“But it’s been minimal,” he said, noting that Mortenson has so far not suspended construction anywhere across the country, and massive 1,200-worker projects were still moving forward.

Scott Pantel, vice president of marketing for Rinderknecht Associates and Merit Construction of Cedar Rapids, said it too, was moving ahead on all its current projects, including those at Mercy Medical Center, where it has completed 120 projects since the 1940s and maintains a permanent office to oversee maintenance and upgrades.

Rinderknecht has also introduced intense safety precautions for both its office workers and those on job sites. The company has sent 20 of its 30 office staffers home to work remotely, locked its doors to the public and leaves all parcels and mail outdoors to sit for 24 hours before opening. Onsite workers are equipped with N95 masks, gloves and sanitation stations. In addition to maintaining proper social distancing, he said, crews were sanitizing tools and job boxes with every use.

So far, supply chain issues have been somewhat minimal and related to transportation delays, leading mostly to one- to two-week lag times. A bit more worrisome is the growing hesitancy to move forward with certain projects.

“We have some stuff signed up, we’re ready to start digging and a few [clients] are saying, ‘Let’s step back for a while,’” Mr. Pantel said. “That doesn’t mean they’re not going forward, but maybe just not right now.”

A few major companies have decided on their own to temporarily suspend construction projects. After several construction workers at an Ireland data center campus tested positive for COVID-19, Facebook temporarily stopped work there, as well as at a second campus underway in Altoona near Des Moines.

For the most part, though, large-scale Iowa projects appear to be moving ahead. During an April 22 webinar hosted by Iowa City business organizations, Rod Lehnertz, senior vice president of finance and operations for the University of Iowa, Lori Sundberg, president of Kirkwood Community College, and Matt Degner, interim superintendent of the Iowa City Community School District, each said they intended to move forward with their planned construction projects.

The Iowa Department of Transportation, which still has $775 million in construction slated for this season, is also expecting to remain on schedule despite the pandemic – albeit with new social distancing safety restrictions, including allowing one employee per vehicle.

In fact, the Iowa DOT said in its most recent update that light traffic on interstates and roadways is actually improving worker safety in some respects. Instead of having to work on heavily traveled roads by night to minimize risk, a significant amount of work has been shifted to daytime hours.

“Right now, we’re staying strong,” Mr. Pantel said of the construction industry as a whole. “But ask again in the late third, early fourth quarter. We have a backlog of jobs into 2021, but are those clients going to say, ‘Hold the boat?’ I think as an industry we’re going to be OK, but we’re going to have to see.”

As of April 11, project postponements and cancellations were on the rise, according to the latest survey conducted by the Associated General Contractors of America. In that weekly survey, 59% of 1,300 respondents indicated projects had been delayed or disrupted, up 45% from the previous week.

Perhaps the hardest impact has been felt on the residential side, with total annualized housing starts plunging by 22.3% in March, according to a report from the U.S. Housing and Urban Development and Commerce departments.

“The consumer sector shuts down fastest because that’s the easiest to put a hold on,” said Joe Ahmann of Ahmann Companies, a diversified cluster of businesses that include residential and commercial architecture, construction, property management and maintenance, and commercial real estate sales.

But on the commercial side, “We had a pretty good backlog of projects that were under contract and those are still moving forward,” he noted. “If you look at the business sector, they aren’t looking at today or tomorrow. Some of these projects have a six-month to a year or year-and-a half occupancy date, so we’re looking that far out and people are saying, ‘Yeah, we need to have this space, we need to just keep moving.’”

Mr. Ahmann, much like Mr. Pantel, anticipates a strong second quarter despite the pandemic, but wondered whether that would hold into the latter part of the year “because of the lag time between getting leads and getting things started and going through the process of city approvals.”

“It’s such a long time period that I don’t think we’re going to see what the [impact] of this is for quite some time.”

Mr. Clarahan said it was a virtual certainty that some rich veins of business for Mortenson, including hotels, convention centers and other hospitality-related projects, would run dry in the short-term. But he expects the company’s diversified approach to save the day, just as it did during the 2008-09 financial crisis. The company could easily shift toward more federal, health care and renewable energy construction, for example.

“We can retool our people to help in an interim fashion,” he said. “And those projects on hold because people didn’t want us in hospitals are going to get re-opened up. I think that long-term, the industry will be fine.”  CBJ