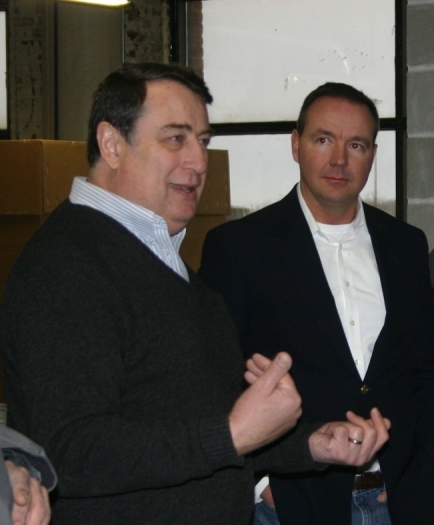 WATERLOO – With sophisticated equipment, support from the state legislature and plans to house the Iowa Advanced Manufacturing Center, the Cedar Valley TechWorks Campus expects to be known as the region’s innovative manufacturing and technology hub.

TechWorks is home to a manufacturing and business center, with a 100-room hotel and restaurant under construction, located next to the John Deere Tractor and Engine Museum.

The Advanced Manufacturing Hub received a major boost last June when nearly $4 million was included in Iowa Economic Development Authority (IEDA) appropriations for the project. The IEDA’s Iowa Innovation Council administered the funds, which were used for improvements in the Tech 1 building.

The hub includes partnerships with University of Northern Iowa, Hawkeye Community College, Wartburg College’s manufacturing engineering program, Iowa State University’s Manufacturing Extension Partnership and others. The hub is available to Iowa manufacturers and others with the aim of increasing competitiveness and commercialization of new products.

About $1.2 million of the state funds was used to buy a three-dimensional (3-D) printer to fabricate on-demand molds for cast components. TechWorks purchased the printer and donated it to the University of Northern Iowa Metal Casting Center to be used as the project’s anchor piece.

The 3-D printer is the largest of its kind available in North America. It is capable of producing a sand-casting mold for solid parts with a volume of more than 13 cubic feet, producing everything from engine cores to axle housings. Since being installed in October, the printer has served various manufacturing companies, including Deere in Waterloo and Moline, Ill.; Caterpillar, Peoria, Ill.; Vermeer Manufacturing, Pella; Viking Pump, Cedar Falls; and Emerson Process Management, Marshalltown.

The printer allows the casting center to assist the companies in understanding the technology and provides resources and technical help, therefore reducing the financial risk for small companies without large budgets for research and prototype development.

The technology is also preparing students for careers in the emerging field of advanced manufacturing, which is having trouble filling positions with qualified people.

“They can’t find people who have experience and education,” Mr. Thiel said.

Students coming out of UNI with a bachelor’s degree in manufacturing technology with an emphasis in metal casting are making $60,000-$70,000, he said.

“UNI grads will be valuable all over the world among their peers,” he said.

State Sen. Jeff Danielson, a Democrat from Black Hawk County, recently visited the Tech I building and watched the 3-D printer in action.

“This is the future; education now leads to jobs for the future,” he said, adding that there is a possibility for more funding for the project to come out of the new legislative session.

Next year, the casting center hopes to install a direct metal printer in the Tech I building, Mr. Thiel said.

“We want Iowa companies to be the most competitive in the Midwest,” he said. “We’re not here to replace anyone; we’re here to support the industry. We talk to companies that can’t wait for us to go to the next step.”

TechWorks was put in motion in 2007, when Deere & Co. in Waterloo donated nearly 40 buildings and 30 acres of land worth $9 million to non-profit economic development group Cedar Valley TechWorks, a subsidiary of the Greater Cedar Valley Alliance and Chamber. At the time, the nation was on the cusp of the recession and the region would soon be hit by widespread flooding, stalling the project nearly to a halt.

“The (manufacturing) industry took a hit, but it is finally coming back,” said Cary Darrah, Cedar Valley TechWorks’ general manager. “Some industries didn’t.”

Deere’s donation included $5.5 million for demolition and clean up of the deteriorating buildings. All but two six-story buildings were torn down. Known as Tech I and Tech II, the remaining buildings are undergoing renovations. The renovation of the third floor of the Tech 1 building is complete, already housing some equipment. TechWorks organizers hope the first and second floors will be ready to be occupied by this summer, Ms. Darrah said.

Plans for the Tech II building, adjacent to the Tech I building, are in the works and the space is all spoken for, Ms. Darrah said. It will house the business-class hotel and restaurant in half of it, along with classroom space and training space for Deere. TechWorks is waiting on a designation from the National Park Service to receive historic tax credits before renovations can begin, Ms. Darrah said.

Also on the TechWorks campus is the new John Deere museum which should open this spring. The museum, owned by Deere, should attract thousands of visitors annually to the hotel and restaurant as well as the entire region, Ms. Darrah said.

Soft opening for new Marion Public Library set on or before Nov. 15

Nordstrom board adopts ‘poison pill’ to fend off potential...