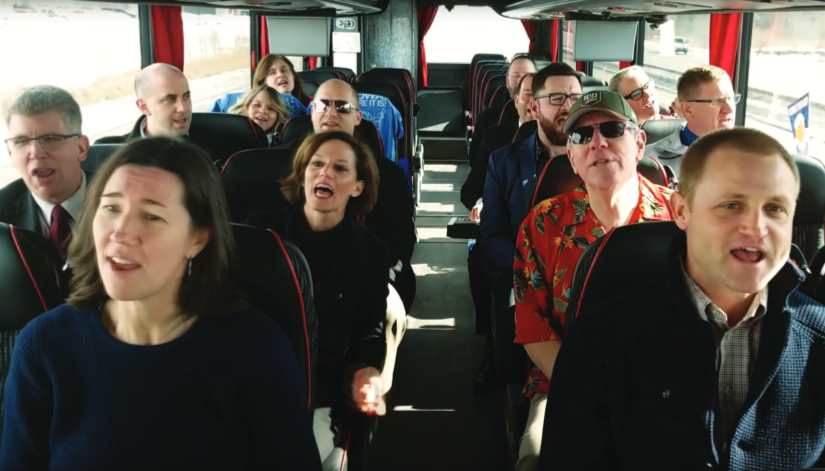 A screenshot from the Iowa City Area Chamber of Commerce’s 2019 video showing a handful of high-profile Johnson County leaders on a bus trip to “the North,” or Cedar Rapids. Riders including Nancy Bird, Nate Kaeding, Kelly Hayworth, Kim Casko and former State Sen. Bob Dvorsky all rode – and sag – on the then-new I-380 Express (see No. 14). CREDIT IOWA CITY CHAMBER

Whether you call it the Corridor, ICR Iowa or just plain home, we can all agree on how much the region has grown – geographically, economically and collaboratively – over the past 15 years. Once a collection of loosely knit cities and towns, our region has been bound together through a series of major events and developments, ranging from the floods of 2008 to the region’s first joint venture focused on economic and workforce development.

In celebration of the CBJ’s 15th anniversary, our news staff took time out (and a few beers) to debate and brainstorm the following list of 15 things that helped make us a more cohesive region over the past 15 years. This list is by no means comprehensive, and definitely subjective. We invite you to weigh in with your thoughts on the key moments in our region’s history, and where we still need to go, at the CBJ’s Facebook and Twitter pages, #15Things.

1 – A solid educational foundation
The region’s premier higher educational institutions – the University of Iowa and Kirkwood Community College – have long been powerful engines for growth, innovation, scholarship and regional interconnectedness. From expanding the frontiers of medical knowledge to its famous Writers Workshop, the UI has made the Corridor a magnet for talent, creativity, innovation and economic activity. Meanwhile, Kirkwood, which began life as Area Ten Community College, has transformed into a regional catalyst, with its seven-county service area mirroring the region’s laborshed and forming the formal boundaries for the Creative Corridor.

2 – I-380 itself
Love it or hate it, it’s hard to imagine a Corridor with a main artery like Interstate 380, which allows drivers to zoom from one end to the other in less than an hour. It’s now used by nearly 10,000 commuters traveling between Cedar Rapids and Iowa City each day, according to the Iowa Department of Transportation, and was the first roadway in the state to be fully mapped for autonomous vehicles. Meanwhile, new interchanges at Forevergreen Road in North Liberty and Tower Terrace Road in Hiawatha and a new turbine interchange coming to I-380/I-80 promise to help handle the ever-increasing traffic loads well into the future.

3 – Regional companies in abundance
From publicly held companies like Collins Aerospace and Pearson to privately held giants like Skogman and Hills Bank, the Corridor counts a plethora of companies with operations in multiple cities (or counties). That geographic spread has supercharged philanthropy efforts in the Corridor, helped build common ties among employees and created a collective identity for residents – a necessary bond as the region continues its rapid growth.

4 – The ‘Technology Corridor’ brand appears
The name “Cedar Rapids-Iowa City Technology Corridor” was first applied in materials sent to recruit businesses from outside the region as early as the late 1990s. The term was designed to help the region stand out amid tough competition from other areas marketing regionally, and from big cities with much more to offer, according to those present at the time. Media outlets seemed to like it, and for a time The Gazette branded itself using the tagline, “An independent newspaper in Iowa’s Technology Corridor.”

5 – Eastern Iowa Airport rebranding
The Cedar Rapids Municipal Airport was rebranded in June 1997 as the Eastern Iowa Airport, helping cement the feel of a region. The action reflected the “airport’s service to all of Eastern Iowa and [intent to] focus marketing efforts regionally,” said the resolution signed by then-Chairman Frank Magid. While the airport commission’s members are still appointed by the mayor of Cedar Rapids, they have been broadened in recent years to include regional leaders. Some 1.2 million passengers traveled through the airport in 2018, and numbers continue to grow.

6 – Richard Florida visits
Any history of the Creative Corridor has to include author and theorist Richard Florida, whose 2002 book, “Rise of the Creative Class” helped reignite local conversations around regionalism and quality of place. Mr. Florida visited the state in 2003 as part of the “Unconference,” a symposium hosted by the Iowa Department of Cultural Affairs, and spoke on his “three Ts” of economic growth: talent, tolerance and technology. His visit would inspire the creation of the “Creative Economy Group,” and lead to the eventual development of the Corridor brand.

7 – The Corridor Business Journal launches
Born in a basement in North Liberty in 2004, the Corridor Business Journal was one of the first truly regional publications, covering business in Cedar Rapids, Iowa City and all across Kirkwood’s seven-county territory. It’s grown to become an outspoken proponent of regional approaches to economic development and a prime connector of businesspeople from all industries and locations in the Corridor.

8 – The floods of 2008
Benjamin Franklin once said that “out of adversity comes opportunity,” and nowhere was that on fuller display than the regional response to the devastating floods of 2008. Torrential rains flooded the Cedar and Iowa rivers, submerging entire communities and wreaking $6.6 billion in damage in Eastern Iowa alone. But instead of giving into despair, residents and communities collaborated to clean up, raise funds and rebuild better and stronger than ever. In Iowa City, most of the destroyed arts campus, including Hancher Auditorium, has been reimagined and reconstructed, while in harder-hit Cedar Rapids, the flood sparked a torrent of urban renewal, including the blossoming of the NewBo district and Kingston Village.

9 – Regional engagement with the “Creative Corridor”
While the “Creative Corridor” brand didn’t formally debut until 2012, it’s since been embraced by businesses and media outlets alike. More than 170 companies and organizations listed by the state as active entities use the word “Corridor” in their names, while CBS2/FOX 28 has made “Covering the Corridor” its tagline. Today the Corridor nomenclature appears regularly in print, television and on business signs from Vinton to Washington as a catch-all term for our corner of Eastern Iowa.

10 – Sporting ties light up the boards
They say sports bring people together, and it’s never been more true in the Corridor. From longtime favorites from the Iowa Hawkeyes and the Cedar Rapids Kernels to the arrival of UCI World Cup cyclocross racing and the debut of the Run CRANDIC marathon, athletic events have become a major regional draw. Even the region’s trail system is getting into the act, with new connections helping to tie together more than 200 miles of trails stretching from Waterloo to Iowa City.

11 – Designation as a Combined Statistical Area
The U.S. Census Bureau’s 2013 designation of a Combined Statistical Area including the Cedar Rapids and Iowa City metropolitan statistical areas (MSAs) went a long way toward putting the Corridor on the map as a true region. The designation recognizes the close trade and commuter ties of a region with (at that time) a population of 420,000. It also creates the desired impression of a larger metro area for the recruitment of businesses, for advertising spending, and even for the attraction of tourism and spectator events. Since the designation, the Corridor’s combined statistical area has grown to 445,696, and its national ranking has increased from 95th to 92nd largest.

13 – Growth accelerates in mid-Corridor communities
The explosion in the growth of smaller communities between and adjacent to Cedar Rapids and Iowa City has helped consolidate the region. The trend became pronounced in a 2017 census update, which ranked Tiffin as the fastest growing community in the state, at 54.4 percent growth between 2010-2016. North Liberty grew by 38 percent over that time, and is becoming an employment center in its own right, with major offices like a GEICO call center and the headquarters of GreenState Credit Union.

14 – I-380 Express begins service
Last October’s launch of the I-380 Express intercity bus service between the Iowa City and Cedar Rapids metros finally made it possible to cross the Corridor via mass transit. The bus service truly connects the region, making stops at the Cedar Rapids Ground Transportation Center, Kirkwood Community College in Cedar Rapids, the Coralville Transit Intermodal Center in the Iowa River Landing, University of Iowa Hospitals and Clinics and in the Iowa City Downtown District.

15 – IC Chamber, Economic Alliance release joint legislative priorities
Recognizing that the “power in numbers” theory extends beyond economic development efforts, the Cedar Rapids Metro Economic Alliance and the Iowa City Area Chamber of Commerce teamed up this year to present a unified set of legislative priorities to lawmakers at the state and federal levels. Working together over a six-month period, the two groups assembled a list of priorities centered around building the regional workforce, improving the business environment and enhancing the community. “It is historic and very significant that we created and approved shared and identical policies,” Economic Alliance Executive Director Doug Neumann said earlier this year.