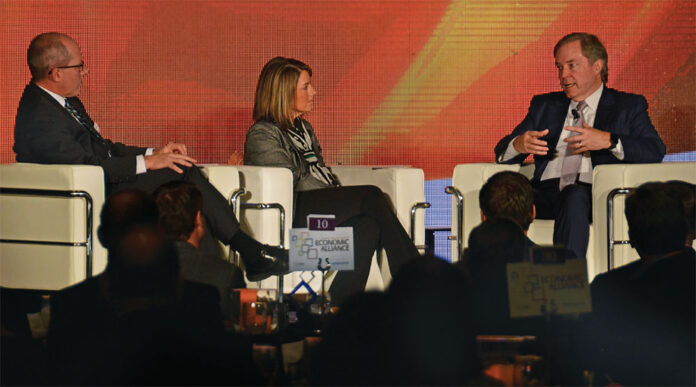 Describing the company’s future in Ce­dar Rapids as “one of growth,” Mr. Mac- Lennan listed off a number of recent and potentially new investments, including a completed $37 million expansion at its soybean processing plant at 410 C Ave. NE, and a new $29.1 million, 100,000-square-foot expansion at its Diamond V South plant at 2525 60th Ave. SW, which is ex­pected to go online this week.

He also noted that “one of our biggest acquisitions in history was right here in Ce­dar Rapids,” referencing its 2017 purchase of Diamond V for an undisclosed amount.

“That’s going to be the future of our company, and the future of the way the world consumes food,” he said of Dia­mond V, adding “we wouldn’t be here if not for the way you support us.”

Although not surprising, Mr. MacLen­nan did not mention the company’s $6.5 million investment in a controversial rail­yard for its corn milling plant at 1710 16th St. SE. That project, set on city-owned land near Prairie Park Fishery and located near a residential neighborhood, drew a handful of cold protestors across the street from the DoubleTree, but little comment inside.

Instead, the day’s focus was squarely on Cargill and its “two-way” relationship with Cedar Rapids and the state of Iowa – one exemplified by the presence of Gov. Kim Reynolds, who introduced Mr. MacLennan.

Speaking of the myriad cultural and business ties with the state, Mr. MacLen­nan noted the company’s founding in Conover, Iowa, in 1865, adding that while its headquarters may now be in Minneap­olis, “we’re an Iowa company.”

Cargill arrived in Cedar Rapids in 1968, and has grown to employ more than 600 people across five plants. Its first corn milling plant started out processing 9,000 bushels a day; it now handles 1.2 million.

Cargill’s Diamond V business is seeing double-digit growth, according to Mr. Ma­cLennan, and its products are expected to be a major part of Cargill’s growth in the future as it focuses on innovations in food and health supplements. Mr. MacLennan was particularly enthusiastic about Di­amond V’s Embria Health Sciences divi­sion, the maker of yeast supplement Epi­Cor, which is shown to support human immune strength and digestive health.

“That’s where the future is going,” he said. “We’ve got a food and technologies business, and EpiCor is part of that.”

Mr. MacLennan’s visit to Cedar Rapids coincided with President Donald Trump’s signing of the new U.S.-Mexico-Canada Agreement (USMCA), to the relief of many in the state’s business community. Asked how the trade pact will impact people in Cedar Rapids, he said that it will main­tain open economic borders with Mexico and Canada, currently two of the Unit­ed States’ top trading partners, and that “markets need to be open for our products from Iowa.” But he also expressed worry that the soybean trade will be slow to re­bound from the United States’ trade war with China, which saw U.S. soy exports plummet after the Chinese slapped heavy retaliatory tariffs on the commodity.

Mr. Trump and China’s lead trade ne­gotiator, Vice Premier Liu He, in January signed a “Phase One” trade deal that calls for China to buy $40-$50 billion in U.S. agricultural products annually over the next two years, effectively doubling the record set in 2012. But some analysts have questioned the country’s intent to follow through, noting that Chinese officials have said the purchases will be “market-based.”

“What remains to be seen is what China will do. Will it start buying volumes from the U.S., or will they have replaced their supply from Brazil?” Mr. MacLennan said. “It’s something I’m concerned about and watching very closely.”

Mr. MacLennan visited Cedar Rapids on the heels of the World Economic Forum in Davos, Switzerland. Acknowledging that the annual forum has been criticized for its mingling of world and business leaders in luxe settings, he defended it as a “place where things really do get done,” adding that attendees were particularly focused on the topic of sustainability.

“The world is increasingly expecting and demanding that the food that is being produced is produced in a way that is respectful of the environment, reduces water, land and greenhouse gas emissions,” Mr. MacLennan noted. “So I think in manufacturing and agriculture, we’ve all got to be thinking about ways to reduce our carbon footprint. It’s very real, and particularly acute with consumers in the western market.”

He also mused on some of the biggest global economic issues facing companies like Cargill, noting that the “inequity and extreme results that come from capitalism” were a common topic in Davos.

“What I didn’t hear clearly spoken about last week [at the forum] is how to fix it. Is it taxation? Social policy? What can be done to level the playing field – those who are in extreme need and poverty, and those who have been left behind, how can people in positions of political influence ease that pain? For me, that’s an important issue and something mentioned very frequently.”

Duane Smith, executive chairman of TrueNorth Companies, was awarded the Economic Alliance’s Howard Hall Excellence in Business Award, given annually to a premier business leader who exemplifies the values of the late industrialist and philanthropist.

Mr. Smith was recognized for his career of work building TrueNorth into one of the area’s largest privately held companies, and his broad-based contributions to the community through board service and financial support. In January, he passed the CEO title to his son, Jason Smith, and assumed executive chairman status as the company transitions to the next generation.

Although unable to attend the meeting due to travel, Mr. Smith said in a video that he was “honored and humbled” to be selected as this year’s recipient.

“Although I did not have the opportunity to meet Mr. Hall, his mark on our community, through his business interests and philanthropic efforts, have left a legacy that many of us look up to and aspire to today.” CBJ