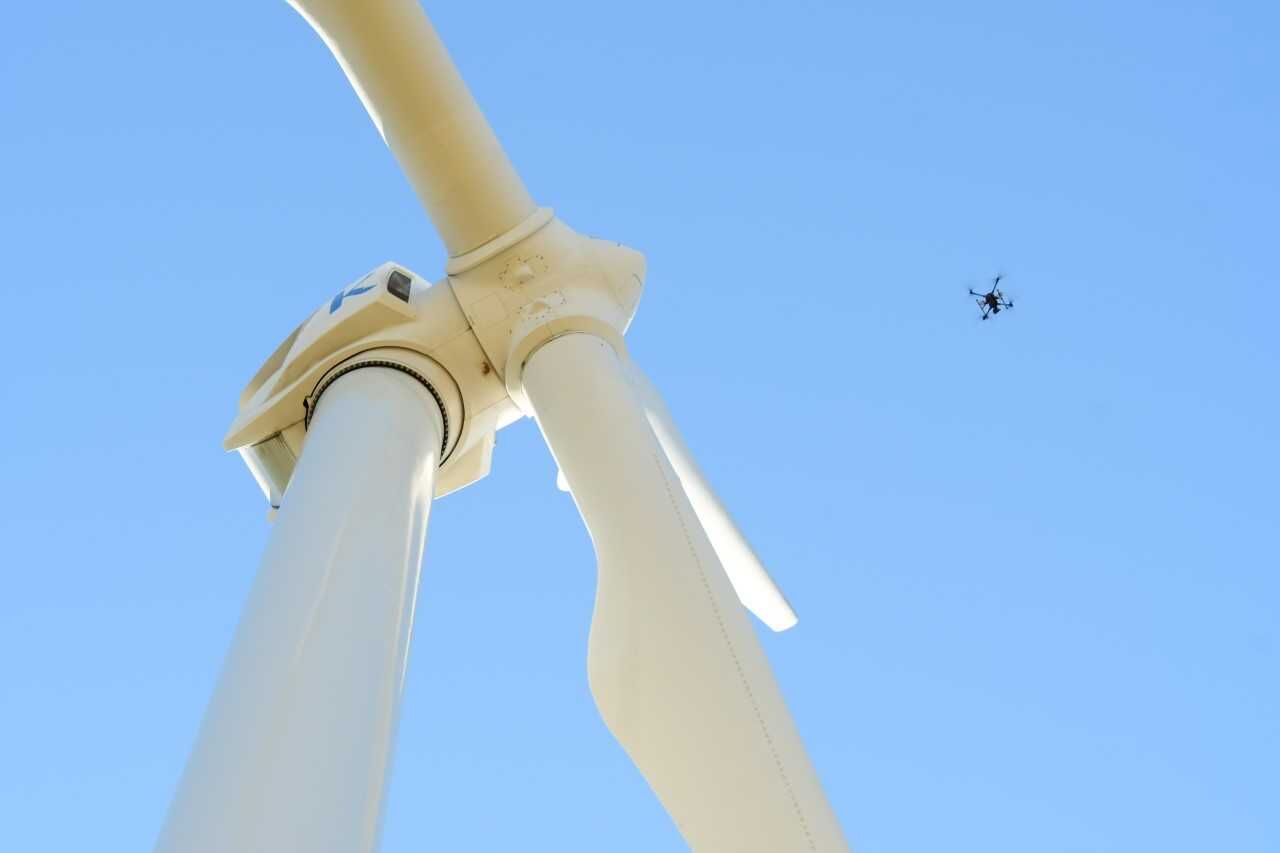 A BladeEdge drone inspects Kirkwood’s wind turbines in this undated photo. The BladeEdge system can perform a blade inspection in about an hour, according to the company. PHOTOS BLADEEDGE

After receiving help from Kirkwood Community College with a site to train its operators, wind turbine analytics company BladeEdge had a chance to repay the favor this spring.

The Cedar Rapids startup went to market in 2015 with proprietary technology for efficiently and safely analyzing the condition of wind turbine blades. Often at least 120 feet long, the blades can develop cracks from vibration and lightning strikes that, if unrepaired, can lead to breakage. More commonly, they develop minor damage, such as the erosion of leading edges that are supposed to cut through the atmosphere and smaller cracks that reduce efficiency.

More than 40 percent of wind turbine insurance claims are the result of blade damage, according to BladeEdge CEO Chris Shroyer. Yet until a few years ago, most wind farm operators could only inspect them by sending climbers rappelling down the blades from heights of more than 200 feet. An inspection could take a full day, followed by hours of examining images and writing reports.

Some companies figured out that inspections could be performed more quickly and safely with high-resolution images captured by drones.

BladeEdge upped the ante with an artificial intelligence-based software platform named EDDIE that analyzes video images of the blades with 98.8 percent confidence. EDDIE eliminates the time it takes for a human inspector to examine the images, noting signs of damage or wear, and classifying it into categories that wind farm owners can use to determine when to take a wind turbine out of service or slow it down to avoid future problems.

Wind turbine blades are typically inspected every one to three years, Mr. Shroyer said. The BladeEdge system can perform a blade inspection by drone in about an hour. It verifies that all the necessary data was accurately captured and prepared for analysis before leaving the wind turbine site, then stores the inspection information and delivers the results to customers through a web portal.

Training customers on the BladeEdge system required the company to make trips to remote wind farms in places like Michigan, southern Minnesota and Missouri, or to Lake Region State College in North Dakota, which has a wind turbine. The time and logistics of travel to those sites could be costly and difficult.

Kirkwood Community College’s wind turbine in Cedar Rapids, a short distance from the company’s offices and a few minutes’ drive from the Eastern Iowa Airport, was more convenient. BladeEdge Director of Operations Lorie Hines approached Kirkwood earlier this year about contracting to use the college’s 2.5-megawatt Clipper Liberty wind turbine for training, and an agreement was reached.

Under that agreement, Kirkwood receives $1,000 for each day the turbine is taken out of service so BladeEdge can fly its drones for customer training and product development. The payments compensate the college for the lost power the turbine would be generating on Alliant Energy’s power grid.

Stopping the turbine was not a new thing for Kirkwood, however. The college periodically suspends its operation for instructional use in its Energy Production & Distribution associate’s degree program. BladeEdge did its first drone inspection at the turbine last fall, and began using it regularly twice per month this spring.

The training opportunities have brought visitors to Kirkwood from Australia, the United Kingdom and South America, as well as various parts of the United States.

In April, the relationship turned up an unexpected benefit for Kirkwood. During an inspection observed by one of Kirkwood’s classes, a 35-foot-long gap was found along the seam of a fiberglass turbine blade. BladeEdge inspected the turbine blade again about one week later, BladeEdge CFO Kris Gulick said, and found the crack had gotten bigger.

The findings indicated the blade had been struck by lightning, according to Troy McQuillen, vice president of facilities and security at Kirkwood.

“It could be a liability, and we were happy that they were able to find it for us and share the video imagery with us,” Mr. McQuillen said.

Mr. Shroyer said BladeEdge’s analytics gave the Kirkwood turbine’s blade a score of four on a five-point scale. A five would have required a shutdown of the turbine because of the risk of blade failure; the rating of four suggested the danger was at least sufficient to slow down the turbine in “maintenance mode.”

Kirkwood had the turbine blade repaired, and it’s back in service. Timely repairs are important, Mr. Shroyer said, because damaged blades deteriorate with use, and repairs can cost hundreds of thousands of dollars.

BladeEdge has also offered Kirkwood an educational partnership that would allow the school’s Energy Production & Distribution program to include its technology as an educational tool to use in its curriculum. No commitments have been made in that regard, however, according to college spokesman Justin Hoehn.

The company was founded by EdgeData, a tech company created by a group of investors including Jeff Thorsteinson, Lonnie Bloomquist and Mr. Shroyer. It was incorporated in North Dakota due to the University of North Dakota’s interest in working with companies to extend its expertise in big data and drone technology to the wind power industry. The university has one of the leading Unmanned Aircraft Systems programs in the country, and partners with the nearby Northern Plains Unmanned Aircraft Systems Test Site, one of five such sites designated by the Federal Aviation Administration.

Mr. Shroyer said one of the non-training purposes of BladeEdge’s drone flights at Kirkwood is to improve the product so that drones can one day perform most of the inspection autonomously, without constant attention from the drone pilot. FAA regulations require the drones to be operated by a certified remote pilot, he noted, but with improvements in drone technology, that’s expected to change, allowing for more autonomous operations. CBJ