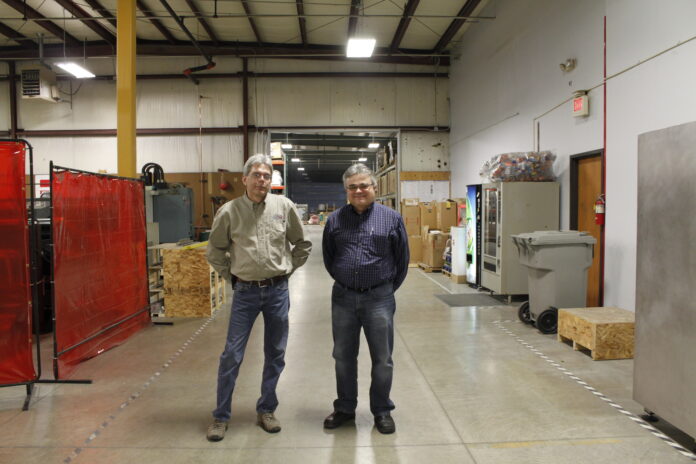 Industrial microwaves built in Cedar Rapids used around the world

Days after marking 10 years in business on March 17, AMTek Microwaves was putting the finishing touches on a new expansion, made possible by a 10-year partial tax exemption and urban revitalization designation from the city of Cedar Rapids. The expansion is expected to add 14 new jobs.

The company was founded in 2003, after the Amana Industrial Microwave Processing Group changed ownership and three of the four co-founders left to start their own business. Tim Scheurs, Tom Allison and Terry LeClere added Stephen Rogers to the team and launched AMTek.

When the company started, it offered servicing and maintenance of industrial microwaves. As time went on, AMTek learned how to make its own microwaves, said Mr. Scheurs, the company’s president and CEO.

Although the co-owners could not begin building their own microwaves right away, they began landing international clients almost immediately, because of their former  relationships, Mr. Scheurs said.

“I knew the right people who wanted to see us be successful, because the competition was undesirable,” he said.

International business makes up about 30 percent of AMTek’s annual revenues, with distributors in Europe, China, Russia, South America and Australia. This diversity helped them weather the recession of 2008, the co-owners said.

AMTek is best known for its tempering systems, the co-owners said. In tempering, the product has to be warmed to a few degrees below freezing for processing before being re-frozen.

For example, when making hamburgers, slaughterhouses cut up the meat and freeze it in large batches to ship it to a processor. The processor must partially thaw the meat to be able to shape it into patties, before refreezing it and shipping it to the final destination, like a grocery store or fast-food restaurant.

The old way of doing this, the coowners said, involved allowing the meat to thaw in open air. Using microwaves is more sanitary, more efficient and results in a cost savings for the customer because there is less product runoff, they said.

The power supplies for AMTek microwaves are roughly 75 times more powerful than a home microwave. Each microwave can be attached to up to four power supplies, further increasing power.

Everything from drafting and 3D modeling to machining small parts and testing the final product is completed at AMTek’s Cedar Rapids facility, at 4115 Thomas Drive SW. It takes 90-120 days to produce one microwave system.

“There’s a lot of experience that goes into building this and doing it right,” Mr. Scheurs said.

Staying innovative is important to maintaining their market position, the coowners said.

“We’re Iowans, who have manufacturing jobs here, who are keeping jobs here, and are bringing international business to the state,” Mr. Rogers said. “If you don’t keep going, someone else is going to come gunning for you.”

One major innovation was celebrated in February, when a new technology from a partnership between AMTek, Marion Mixers and the University of Northern Iowa’s National Ag-Based Lubricants Center was introduced. Heating bio-based grease with microwaves, rather than traditional methods and constantly mixing it, results in a product that is more stable, has less damage and can be produced more quickly. The bio-based greases can be used in industrial, railroad or food production machines, among others.