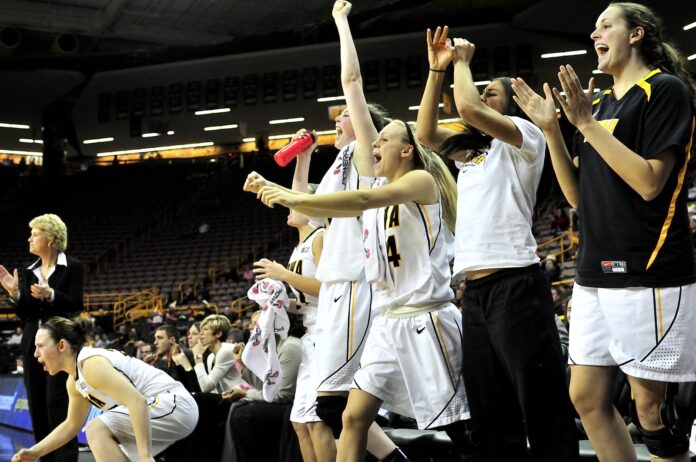 Lisa Bluder admits she can get passionate.

That passion could be the reason she has been one of the University of Iowa’s women’s basketball program’s — and the sport’s — most successful coaches.

Ms. Bluder, who has been coaching for nearly three decades, compares being a college-level coach to running a business.

The Marion native came to the UI after spending 10 seasons coaching at Drake University in Des Moines. She is in her 13th season at UI and 28th year overall. Since her start, the Hawkeyes have advanced to 11 postseason appearances (nine NCAA and two WNIT), including NCAA tournament berths in each of the last five seasons. Ms. Bluder has posted a 230-144 (.615) record at Iowa and her 28-year record stood at 586-286 (.672) at press time. Her 230 wins at Iowa are the second-most of any Hawkeye women’s basketball coach, behind Hall of Famer C. Vivian Stringer (269 wins), according to Ms. Bluder’s online bio.

“I think winning is very important, but it’s not the ultimate,” she said. “Everybody loves a winner, but also when they get here, it’s important they’re having fun. There’s a lot to marketing, with the band, the cheerleaders…but the game is the No. 1 experience.”

“Psychologically, there’s a lot to this job. It’s not just about rolling out a basketball,” Ms. Bluder said.

She has about four years left on her contract with the university, which would be up for possible renewal. She doesn’t have plans to retire.

“The first job I took in coaching I had no long-term aspirations,” she said.

Ms. Bluder admits that during the season, she isn’t the best at balancing her work and family.

“During the season it’s very hectic,” she said. “I haven’t had a Thanksgiving at home for probably 15 years.”

Luckily, when Ms. Bluder started the demanding job of college coaching, her husband, David, left his job in banking to manage the family.

Many times, her family travels with her, eats meals with the team and gets to hang out at practices.

During the offseason, and when they find time during the game season, Ms. Bluder and her staff are recruiting. The busiest recruiting time is in the summer months when they can get away and travel to see recruits.

One of the most important parts of Ms. Bluder’s success is careful recruiting.

“Iowa doesn’t have a lot of cool factor, it can be a difficult sell,” she said. “We’re the least populated state in the Big 10.”

They look at three general areas when choosing players, she said. They include: athletic ability and skill, academic success and the character of the person.

The third area is the most difficult to judge: finding people who are self-motivated and have athletic skills up to the team’s standards can be challenging.

“Since we don’t have professional sports in the state, people are more passionate about college sports. We’re kind of the pro team of Eastern Iowa,” she said.

Part of finding players with the right character, for example, is looking for the type of people who will take time to sign an autograph and take a picture with a child or fan who approaches them while they are at the movie theater or out in public, she said.

“There’s a very limited time in your life where you are a role model,” she said. The recruitment process has become more and more competitive. They may watch a high school player several years, or get a student committed in their freshman year of high school.

“It’s not unusual for a freshman in high school to be recruited for a Division 1 team,” she said. “I think like any business, you have to hire the right people. I’m blessed to have
two assistant coaches who have been with me for 21 years,” she said.

Student-athletes under Ms. Bluder at UI have been named Academic all-Big Ten 56 times, including a program-best eight honorees in 2011 and 2012. Additionally, Lindsey Meder was a two-time Academic all-American (2001 and 2002).

In her 10 years as Drake University women’s basketball coach, Ms. Bluder established herself as one of the top coaches in the country. She led Drake to five 20-plus-win seasons in her last six years, including five post-season appearances.  She guided the team to eight Missouri Valley Conference tournament appearances, reaching the semifinals six times and winning the tournament four times.

A graduate of Linn-Mar High School in Marion, Ms. Bluder was a three-year starter at UNI. She graduated from UNI in 1983 with a bachelor’s degree in marketing. On Sept. 4, 2008, she was inducted to the Linn-Mar Athletic Hall of Fame. She has also been inducted to the UNI and St. Ambrose Hall of Fame.

The 15 women on the team learn lessons such as time management skills, how to work in a group, how to win and lose with grace, how to conduct themselves during press conferences and interviews and discipline from working out and focusing on nutrition.

“I feel like when my players graduate they are better candidates for better jobs,” Ms. Bluder said. “You learn lessons you’re going to use for the rest of your life.”

Through her coaching career, Ms. Bluder has also learned lessons.

“I try to be a better listener. I understand that relationships are much more important,” she said. “I hope they would say I’m hard working. I hope they would consider me successful not only in basketball but also as a wife and mother.”

Ms. Bluder said she hasn’t had one clear mentor in her career, though she has been a key mentor for many athletes over the years.

“I absolutely love playing for Coach Bluder,” said UI senior guard Jaime Printy. “She’s a very positive coach and no matter what, she has our backs.”

Ms. Printy has played on the team for four years. She isn’t sure what she wants to do after she graduates; she’s majoring in recreation and sports business.

“Even though we’re here to play basketball, it’s about so much more than that. She just knows there’s more to life than basketball. She wants us to leave here better people and better basketball players,” she said.

“I’ve been playing basketball ever since I could walk. I grew up in Marion and I always wanted to be an Iowa Hawkeye. I got the offer to play when I was a freshman (in high school) and I committed my freshman year to play for Coach Bluder and I wouldn’t change a thing,” she said.

Ms. Bluder and her husband have two daughters, Hannah (15) and Emma (12) and one son, David (10). The oldest and youngest play sports like basketball and soccer. Emma, the middle daughter, is interested in dance, debate and show choir, Ms. Bluder said.