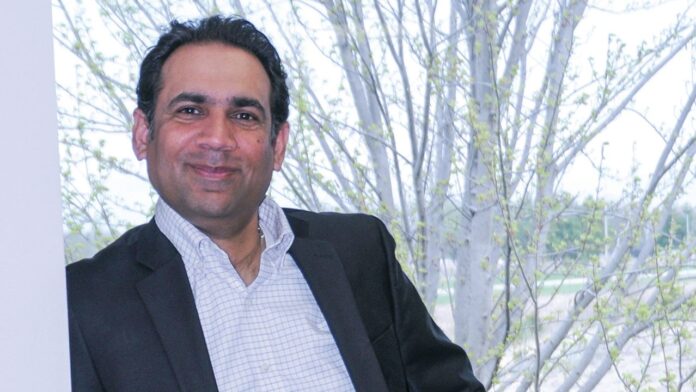 Pankaj Monga is the entrepreneur behind Channel Fusion, a marketing and advertising service provider based in Hiawatha. Pankaj is an immigrant who came to the United States in 1991 and has built an international business that serves some of the biggest companies in the world.

I talk to Pankaj about the origin story of his company, Channel Fusion, how “Positively Outrageous Service” sets Channel Fusion apart from its competitors, and how being an immigrant gave him a hunger that has led to his success.

NK: You emigrated to the United States from India when you were 18 in 1991. What went into that decision for you and your family?

My father wanted me to be an engineer but my coach, who had played collegiate tennis in the U.S., really kind of got my dad convinced that this was the right thing for me if I would make sure that I got a good major, studied hard, and kept my grades going. My dream growing up was always to be a professional tennis player, and my coach convinced me that this would be a good way to pursue my dream. So we all kind of agreed on our perspectives, and that’s how I landed here.

At what point did your professional aspiration for tennis diverge into being an entrepreneur?

I think the game decided that for me. Tennis, like golf, is a very individual sport. I was lucky enough to get a full ride to college and had a great experience. I had six guys on my team that were from six different countries. My roommate was from Egypt, and we had guys from Holland, from Australia, from Columbia, from the Philippines. So we had a lot of really good players. Our team was ranked third in my junior year.

After you get out from that collegiate environment, you’re kind of thrown to the sharks. You’re kind of on your own. You’ve got to go out and get sponsorships and slog in the mini-tour events, just like any professional golfer would. That experience was hard. And on top of that, I had the whole immigration issue. I had to figure out how to extend my visa, and things were a lot easier back then than they are now, but it was just a confluence of, you know, coming back from a tennis tournament at three o’clock in the morning and taking the calculus test at seven. So being a student-athlete was hard. We had to do a lot of time management. So by the time we got through it, I think I was a little bit burned out trying to play in different tournaments and quickly realizing that this is a difficult thing to do. That’s kind of when I think the game picked it for me.

What was your first foray into the professional world outside of college?

I think this was kind of a destiny type of situation for me. When I graduated college, I ended up connecting with the CEO of an advertising agency. The CEO of the agency, Buzz Baker, was a great mentor. He was a huge influence on me and recruited me into the organization. They got me into the Cedar Rapids area, and I got into marketing and advertising and loved that. It was a great agency. I had a blast and learned a lot. Those eight years were formative for me in terms of learning the ropes, if you will. Unfortunately, in 2002, the agency went under after 60 years.

So I had a choice. Do I go into the corporate world, or do I venture out on my own? And, at that point, I had made some connections, and I was very fortunate enough to connect with two great individuals, Frank Mayer and Jeremy Pagden, a rising star in the Omnicom world, a large holding company out of Madison Avenue.

He reached out to me and said, “Hey, let’s start a joint venture together.” We started in 2002 under the Omnicom umbrella, and I learned a lot from getting to know some great executives. Omnicom Dell does a lot of advertising for over 5,000 clients. The portfolio had, you know, Steve Jobs and Jack Welch and a lot of great CEOs that I had an opportunity to learn from. In 2011, I decided that I felt like I needed to spread my wings alone. I approached them and said, “Is this something you feel like I can spin-off on?” And they were very kind and said, “Yes. Go and do your entrepreneurial thing.” So I bought the rest of it out. It has been 10 years, and we’ve tripled in size. It has been a great story so far.

How do you define marketing?

I heard a great quote one time that I’ve used in several classes and meetings. It’s kind of funny but somewhat true. “Marketing is like kissing Cindy Crawford in the dark. You know it. She knows it. Nobody else knows it or is going to believe you, so let’s turn the lights on.” So I’ve always found that very interesting. Marketing is really about awareness, and a lot of companies think that sales drives the internet, but it’s the marketing that feeds into the brand. It’s marketing that allows Budweiser to have commercials with lizards and no beer in there, and you know what it is. If people know the brand and they trust the brand, the sale becomes much easier. I think marketing is an important part of the whole sales and marketing process.

We are in a very niche business. The channel in Channel Fusion stands for the channel of distribution. So our focus point is dealers and distributors for a particular brand. The brand hires us. One of our largest clients, and a great American brand, John Deere, has hired us over the last 20 years to work with all the dealers across the U.S. and North America. We just last year started in Australia and are now working with the Latin division as well. So they hire us to work with their channel of distribution. In their case, that happens to be the dealer. Ours is more B2B marketing initiatives. We help the dealers manage the co-op funds, the rebates, the local promotions, and all these promotions are sanctioned by the brand. So while the brand is working with a national agency to drive the brand nationally, let’s say during March Madness or all those fun Super Bowl commercials you see, ours is more at the local level. We take that national branding and help the dealers promote that same branding at the local level.

The first value on your website is “Positively Outrageous Service.” How have your values helped guide you throughout Channel Fusion’s lifespan?

So positively outrageous service, I have to admit, we plagiarized from a company that I’ve admired, and I had a chance to spend some time knowing, and that was Southwest Airlines. I felt a lot of the leaders I admired the most, Herb Kelleher, was what I wanted to be. He had this notion of positively outrageous service where they would go way above and beyond. A lot of very good companies do things right, but I think the great ones do the right things. He, I think, made the difference between the two possible for me to learn.  So we’ve kind of used that and gone above and beyond in making sure that our clients, who have a choice to be with anybody, understand how humbled we are by having their businesses.

Has there been a turning point, if you look back over the last 10 years of Channel Fusion that propelled you guys on?

One thing we did do in 2013 was that we opened our office in India, which was quite an experiment. I think that has been one of the best decisions I’ve made because of the amount of talent that we’ve been able to tap into there. It also opens up an opportunity in all the emerging markets that quality industry-leading client brands are in right now. I think it gave us a dual advantage of not only tapping into some great technical talent but also opening that market for us.

What advantage do you think being an immigrant to the United States has given you in business?

I think that’s a great question. I think it has given me the hunger. The one word that my father has always taught me and has had a great influence on me is the word “perspective.” He says that unless you have seen both sides, you only know one side of the story. We are truly blessed with a country that has given us so much. I think when you have perspective, and you see a lot of “not-haves,” that gives you a hunger to succeed. I think that was a perspective that is never really lost on me.

What advice would you give an 18-year-old coming to the United States from India today?

I would say, you know, times have changed a lot. Back in 1990, I didn’t have as much exposure. Kids nowadays are completely exposed. If a kid is coming from India at 18, there’s a good chance that he or she has been to Europe or the U.S. before. They are very exposed with the internet and technology. So I think the kids today have it much easier, from an exposure standpoint, in coming in and adjusting. However, I think that distractions have tripled as well. I think “keeping the focus” is what I’d say. Determine what you want and then go after it because there’s no other country in the world that’ll give you that opportunity.

What does success look like for you if you look 10 years into the future?

I think success, to me, is the intersection between professional and personal fulfillment. My son still has a long way to go as a golfer. There are a lot of great young golfers in Iowa that he’s competing against. I think I learn from him as much as he learns from me. I think it would be awesome for me, on a personal level, to see him grow up as a golfer and as a student-athlete, and hopefully be a contributing citizen, whether it be sports or through some other means down the line. From a professional standpoint, I think growth is the only evidence of life. Our team is working hard to double our company, and I think just continuing to grow and create a positive impact in people’s lives and affecting our client’s outcomes is what I feel would be a really good professional success for us over the next five years.