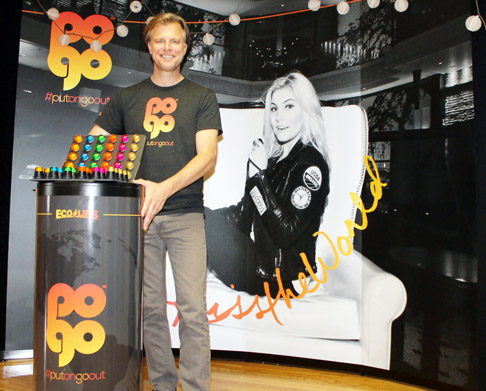 Eco Lips CEO Steve Shriver shows off the new POGO line in front of the brand’s tradeshow display on a recent afternoon.

POGO is the first major brand launched by the Cedar Rapids-based company since its Mongo Lips brand was introduced three years ago. Eco Lips CEO Steve Shriver said it’s already shaping up to be the company’s leading line.

“Our goal has always been to create the most sustainable lip balm on the planet,” Mr. Shriver said. “One of the components we’ve worked on over the years is a refillable lip balm product.”

Finding the right container was a major obstacle. Eco Lips saw an opening last year after a Canadian customer who had obtained a patent for a refillable lip balm container contacted the company and suggested it might be a fit for their products.

“We saw a sketch of it and the next day I bought to ticket to Toronto to go meet with him,” Mr. Shriver said.

The container design fit in with a new trend toward spherical lip balm containers, but had a wider, indented base and a tapered top that set it apart. Eco Lips put its own touches on the container design, adding a brightly colored translucent cap made from post-consumer plastic to reflect the flavor inside. The base is black plastic with a softer feel.

“We ended up with an informed design – a package that speaks to the consumer,” Mr. Shriver said.

The Canadian inventor had named his patented container the POGO, because its shape resembled a pogo stick, Mr. Shriver said. The name eventually won over the Eco Lips marketing team, and made a good acronym for “put on – go out,” which is used in marketing messages such as “put on – go out skiing,” and “put on – go out dancing.”

Eco Lips used a consultant to develop a carefully crafted marketing and branding campaign for POGO based on the key market demographic of millennial women, who tend to identify strongly with their brands, share products and like the spherical packaging.

POGO was introduced this spring to about 70,000 retail industry attendees at the Natural Products Expo West trade show in Anaheim, California, with the slogan “Kiss the World.” Already being tested in 250 Target stores, it recently went out to Hy-Vee stores, and will be arriving in 800 Ulta Beauty stores in July.

Eco Lips had an established distribution channel in the natural and health foods market, including one of the industry’s leaders, Whole Foods. But it had not been able to crack the mass-market retailers.

“With the Eco Lips brand, we weren’t able to get meetings with buyers and placement in stores, because we didn’t have enough distribution,” he explained.

Eco Lips has expanded its staff by five to ramp up production in Cedar Rapids, but is for the first time concerned about meeting demand because of the early market response, Mr. Shriver said.

The POGO launch will include sponsorship of music festivals and fashion shows across the country, including the upcoming Camp Euroforia outdoor music extravaganza in Lone Tree.

“We’ve never put this much energy, money and time into a product,” Mr. Shriver said.

Now that POGO is in the marketplace, he said the focus has shifted to packaging and marketing for refills, which aren’t yet available.

“We believe we have a category disruptor here,” Mr. Shriver said. “We just need to make sure we take the steps to understand the consumer and deliver a product she will embrace.”

POGO is now available for $3.49 in five flavors, but the product roadmap calls for a series of new flavors and enhancements in the coming years.

Now in its 13th year, Eco Lips has 57 different products and is growing revenues at a rate of about 35 percent annually, according to Mr. Shriver, the CBJ’s 2014 Entrepreneur of the Year. The company has made both the CBJ’s list of Fastest Growing Companies, and the Inc. 5000 fastest growing list.