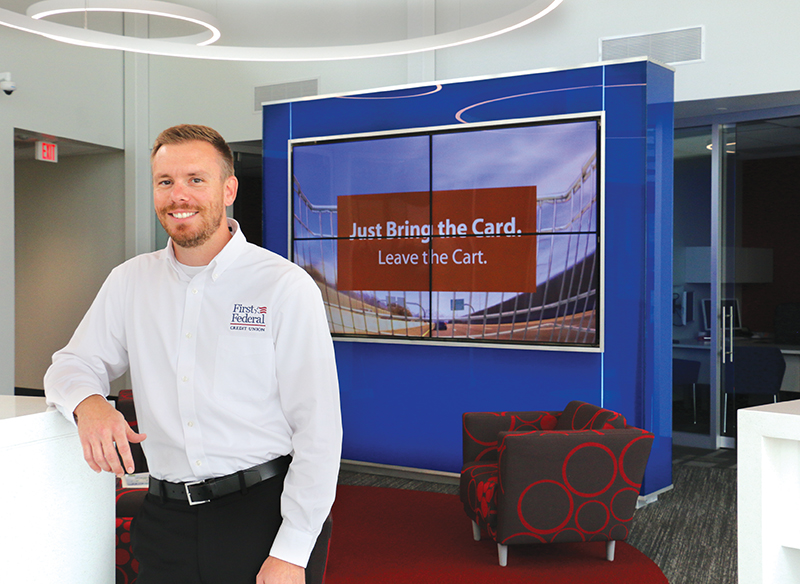 While some of the nation’s biggest banks are closing branches at a record pace, a new generation of financial branches is emerging in the Corridor, designed to complement customers’ increasingly digital lives.

Dupaco Community Credit Union calls its new branch at Squaw Creek Crossing in Marion its Learning Lab. A member service associate greets everyone who comes through the door, but there’s no teller.

Members who want to make a transaction are introduced to the interactive teller machine (ITM), where they interact, via video, with a teller based at the credit union’s Dubuque headquarters.

The teller explains how to use the machine, so that even those who are uncomfortable with technology can make deposits, withdrawals and fund transfers quickly and easily.

But the real purpose of the ITM, according to Chief Marketing Officer Dave Klavitter, is to free up in-branch staff so they can educate members about things they really need, from ways to improve their credit score to applying for a mortgage or auto loan.

“Our value proposition is related to helping members with their money,” Mr. Klavitter said. “So we asked, ‘How do our branches revolve around this?’”

The answer can be found in more collaborative spaces, including a standing table with a large computer screen and another with tablet computers that’s used to explain mobile banking technology.

The exterior walls that abut the busy intersection of highways 13 and 151 are covered with sage glass, which darkens in the sunlight for reduced glare and heat absorption. At night, the expanse is crystal clear, allowing passing drivers to see the lighted signs and features within. The metal-paneled exterior is adorned in bright colors, including a festive band intended to underscore the credit union’s desire to reach people from all cultures and walks of life.

“We don’t build as many branches as we used to,” Mr. Klavitter said, “so when we do, they have to act a little like billboards.”

That’s true both inside and outside the building. The interior glass walls are covered with wraps that feature photographs and images depicting the evolution of Dupaco, from its 1948 founding by 10 meatpackers who pooled $5 each with a $123 loan from their labor union, to its current status as an 110,000-member organization.

Bank and credit union branches were once built with fortress-like features such as stone walls and massive doors to remind customers of how secure their money was, Mr. Klavitter said. Now that the security of funds is more a matter of cybersecurity, financial institutions are working to satisfy the growing preference for spaces that are more open and transparent.

Transparency was also on the minds of leaders at First Federal Community Credit Union, which opened a new branch at Westdale in Cedar Rapids last year. The space makes a statement with a glass-enclosed lobby that extends out from the main perimeter of the structure, adorned by louvers and a distinctive roofline with only one slope.

The branch serves members with its own version of interactive teller machines called express teller machines, or ETMs. Senior Vice President Chris Neal said the units feature a phone handset and a texting function for times when members want to communicate privately with the teller instead of speaking out loud, and a built-in audio adapter for ADA compliance.

“It also records every single transaction, so it takes security to the next level,” Mr. Neal said.

First Federal sees ETMs as an important part of its future, since mobile banking, electronic funds transfers and other technologies are greatly reducing the need for face-to-face interactions with a teller.

The credit union is planning a contact center that will comfortably house the tellers needed to staff its growing network of ETMs, according to Mr. Neal, who worked with CEO Tom Chalstrom on the building’s design.

When the branch was done, Mr. Neal said it felt a lot like an Apple retail store, with an open, clean and sophisticated look. It has since become something of a destination for other finance leaders looking for ideas.

“We’ve had a number of institutions that have taken a tour of it,” he noted. “We’ve opened our doors to anybody, banking or credit unions, to come by and tour it.”

The pace of bank branch openings in the Corridor has been slower than credit union branches in recent years, and some consolidation has occurred. Wells Fargo, which had one of the area’s largest branch networks, has scaled back and sold some of its branches.

Cedar Rapids Bank & Trust bought one of those branches, located at 3406 F Ave. NW, in late August, with plans to replace another branch office on Jacolyn Drive NW office it acquired with its 2017 purchase of Guaranty Bank. The new location will be remodeled by Rinderknecht Associates, CRBT President Larry Helling said, and will enhance the bank’s footprint with a higher-traffic loca­tion at the busy intersection of F Avenue and Edgewood Road NW.

Opened in early September, Central State Bank’s renovation reflected some of the trends seen in the new credit union branches. The expansive lobby was given a sleek contemporary look, but also scaled back in size. Some of the lobby space was reconfigured to provide more office space for confidential customer contact.

The number of bank branches peaked in 2009, according to a February report by the St. Louis Federal Reserve, and has de­clined by 10 percent since then. The num­ber of closures appears to be accelerating, with the Wall Street Journal reporting that branches declined in number by 1,700 from June 2016 to June 2017, the biggest one-year decline in history.

While the trimming began in the wake of the 2008 financial crisis, the St. Louis Fed report said branch closings were also influenced by earnings pressure from low interest rates and rising regulatory costs.

Nancy Kasparek recently left U.S. Bank after a 21-year career that began as assis­tant teller and ended as Division Presi­dent. She can remember when customers stood in line 12-deep on busy paydays, and lines could stretch to the sidewalk.

“What used to be the biggest foot traffic in a brick-and-mortar building, to make a deposit or withdraw money, has changed,” she said. Even so, she doesn’t expect branches to disappear anytime soon.

“They say the need for branches is go­ing down, and with the large institutions, we’ve seen a lot of that, but a branch is still needed,” Mr. Neal said. “We’re trying to make things as easy as possible by do­ing as much with mobile technology as we can, but even with all that ability, you still need to serve those members who don’t function that way.”

The changing function of the financial branch could eventually change the face of communities, as fewer prime corners are taken up for banking. While banks traditionally picked high-traffic locations with easy-in, easy-out access, Mr. Klavitter said Dupaco’s Learning Lab isn’t particu­larly easy to get to. Located prominently in a new multi-use development with a con­venience store going up next door, “it’s a destination,” he said, where members will be dropping in to spend some time rather than just dashing in and out.

The evolution of branches is set to con­tinue at a fast pace, Mr. Klavitter added. Al­ready, Dupaco leaders have talked about adding telemedicine kiosks at branches where members who don’t have conve­nient access to medical care could consult remotely with a care provider.