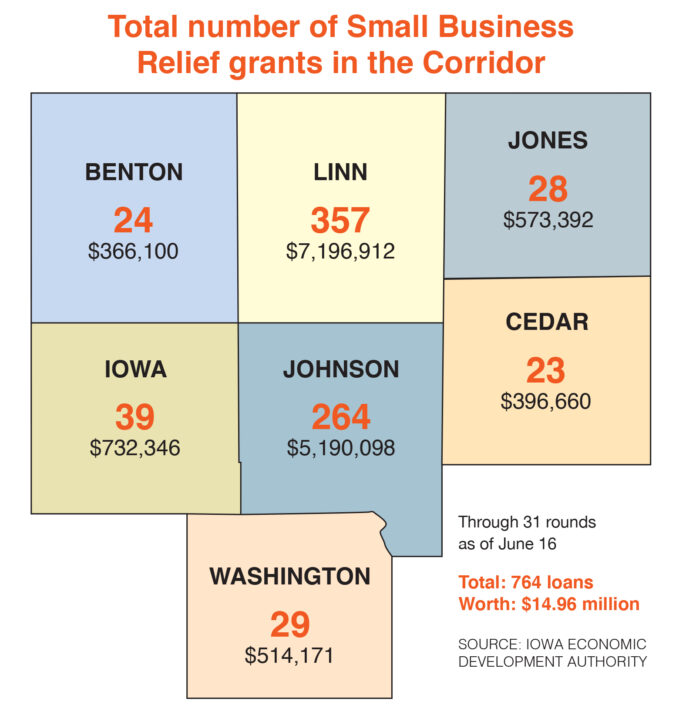 Corridor businesses from restaurants to pet groomers have received nearly $15 million from an emergency grant program intended to toss a temporary lifeline to some of the places hit hardest in the early days of the COVID-19 pandemic.

The seven-county Corridor region was allotted about 18.3% of those funds, with Linn County receiving the lion’s share of aid to date, at 357 grants totaling nearly $7.2 million. That was followed by Johnson County, with 264 grants worth nearly $5.2 million.

The program, which has sparked some controversy over how IEDA officials chose award winners, was devised and rolled out in the 18-day span just after Gov. Kim Reynolds closed most Iowa businesses in March. It began with $24 million in state funding, but has since grown to $94 million, thanks to an injection of stimulus cash from the federal CARES Act.

“We are getting very close to wrapping it up at this point,” IEDA Chief Strategic Communications Officer Shari Hupp Ballard said of the program that initially attracted 14,000 applications requesting $148 million. “We are still working through some applications and doing a review, but we do expect to be done pretty soon.”

According to Ms. Hupp Ballard, applicants for the short-term stopgap program were initially triaged for eligibility and economic need, with priority given to businesses projecting revenue losses of 75% or more and those first ordered to close due to the statewide public health emergency.

“It was initially an emergency stopgap and was ultimately a brand new program for us,” she said in response to criticism of the program. “We didn’t have rules for it, we’ve never served the population at such a large scale, but despite that, we moved very quickly and got the first checks out the door within 18 days.”

In the early days of the program, before CARES money began to pour in, just 7% of program applicants received funds, leaving a number of business owners openly frustrated and questioning the award criteria, and why enterprises with several locations received multiple maximum-level $25,000 grants while other, shuttered businesses were denied.

Since then, the percentage of applicants receiving grants has risen to 32%, according to the IEDA. But that hasn’t stopped ongoing grumbling on social media sites, such as the IEDA’s Facebook page, or an inquiry by state Auditor Rob Sand.

“Jump through hoops, supply a multitude of documents just as quickly as asked for and get no assistance … never mind my business has dropped income 75% or more,” said Becky Kies Gudenkaft, owner of Classics Customs and Repair in Onslow in one recent post that generated a chorus of similar comments from other discouraged business owners. “The government is doing nothing but pushing small businesses out.”

The CBJ reported on several businesses receiving multiple maximum awards, including Brown’s Shoe Fit. The chain received four grants for four locations totaling $87,000 in the first round of funding and 11 grants for 11 more locations – all for the maximum $25,000 – for a total of $275,000 in the second round. Meanwhile, a Des Moines Register examination of the program’s first 3,600 grant awardees earlier this month also found that some business owners collected maximum grants awards for multiple businesses, while “others with deep losses who were forced to shut down because of the pandemic received nothing.”

The Register review also turned up several instances in which IEDA mistakenly sent multiple grant award notices or checks to businesses that were supposed to receive only one.

Mr. Sand, who is conducting a full audit and review of the grant program, told the CBJ complaints to his office had tapered off somewhat with the passage of time, but that the audit is ongoing and unlikely to wrap up anytime soon.

“We want to make sure the only thing we’re thinking about is, ‘Are we finished?’” Mr. Sand said. “And I don’t expect to be finished for quite some time.”

Ms. Hupp Ballard said IEDA might make changes if the agency could do it all over again, but stressed people had been helped “very, very quickly” as staff worked its way through more applications than it typically receives in a full year.

“Are there things we’d do differently knowing what we know? Yes,” she said. “But we’ve done the best we can, getting the program off the ground and help out the door.”   CBJ

Cedar Rapids city buildings will require masks regardless of...

The Diversity, Inclusion & Impact Symposium will educate and inspire leaders with nationally known speakers and best practices on the critical topics of diversity, equity, inclusion and engagement. Register now!