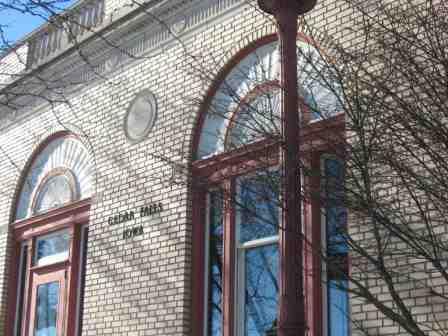 CORRIDOR — Jeanne Matthews hopes the renovation project she and her husband, Paul, are embarking on in Marion will inspire others to preserve historic buildings.

“Hopefully by stepping forward and being the first guinea pigs, others will follow suit,” Ms. Matthews said.

Last year, the couple bought the old Memorial Hall building at 760 11th St. in Uptown Marion. Although the 1900-built structure was in disrepair, they saw its potential.

“The minute we walked in that building, we fell in love with it; there’s so much history,” Ms. Matthews said.  “Even at its absolute worst, it’s something that’s just so beautiful.”

Last week, the Memorial Hall restoration project was one of 14 across the state awarded a Main Street Iowa Challenge grant through the Iowa Economic Development Authority (IEDA).  The Marion project was awarded a $75,000 grant. A stipulation of the grant was each project had to provide at least a dollar-for-dollar cash match. The Matthews agreed to a $99,324 match to complete the first-floor phase of the project.

“We’re really excited about it,” Nick Glew, Uptown Marion program director, said about the program’s first major project. “We hope it is a catalyst for other building owners who are renovating buildings”

The top level of the building has been renovated into a 2,650-square-feet single residential space where the Matthews now live.

“We’ve been working on the top level and waiting to see if we got the grant,” Ms. Matthews said. “This couldn’t come at a better time.”

The $75,000 will go toward making the lower level into usable space with updated plumbing, heating and electrical systems. It will have two restrooms in the center of the space, so it could be occupied by one business or divided into several, Ms. Matthews said. A brew pub is a possibility, she said, although nothing has been determined.

Since renovations began on the building in July, the Matthews have been impressed with the level of interest from the community.

“It shows that it can bring vitality to the community,” Ms. Matthews said. “It will create jobs, real estate taxes and increase the value to the businesses around it.”

They hope to have tenants in the lower level by late summer or early fall.

The CFDG will provide a $110,000 match for the grant to update the building’s mechanicals, such as heating and plumbing. According to Mark Miller, president of the CFDG, the total cost of the project will be $400,000 to $500,000 to make the building tenant-ready.

The building was built in 1919 and served as Cedar Falls’ post office until 1961. Subsequent tenants made various modifications over the years, resulting in original features being covered or removed. Work to be undertaken on the exterior includes: repair to the roof, front stairs, windows and doors, loading dock, decorative lighting, tuck pointing and landscaping. Interior work will include: asbestos removal, mold mitigation, demolition of temporary walls and drop ceiling, replacement of mechanicals, electrical modifications and a return to the original floor plan with restoration of the lobby in the front third of the building.

After the Cedar Falls City Council voted in 2012 to tear down the building which had previously been used as an annex to city hall, a group of concerned citizens formed to research preservation options. The CFDG formed in April 2013 with a mission statement “to promote the long-term economic vitality of Cedar Falls’ central business district by investing in properties with the intent of facilitating their rehabilitation in a manner that respects the original character of the properties and the surrounding structures.”

In September 2013, the city council agreed to support the CFDG’s intention to seek a Main Street Challenge grant to help renovate the former post office. A long-term lease between CFDG and the city of Cedar Falls is pending approval.

The CFDG hopes to have the building tenant-ready by the end of this year, Mr. Miller said. Possible uses for the building could be retail or office space.

This year, the Challenge Grant program will be funded through an appropriation from the Iowa Legislature. Previous grants were funded through a federal appropriation. This year’s grants total $951,000 to be awarded to 14 Iowa communities to complete projects to have a total project cost of more than $3.6 million.