Best of the Corridor: Mediacom evolves into broadband leader 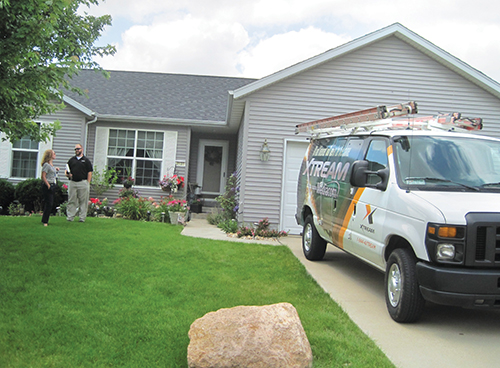 Wins in five different Best of the Corridor categories testify to the breadth and quality of services that Mediacom has become known for in the Corridor.

“We’re much more of a technology company than your father’s cable company,” said Phyllis Peters, Mediacom’s communications director. “We’re not just what brings ESPN to your TV anymore.”

READ: See the CBJ’s other 2015 Best of the Corridor winners

Although it’s still primarily thought of as the cable company, the business has outgrown that narrow definition. Mediacom has “passed the threshold” where other service demands outweigh cable TV service demand, according to Ms. Peters.

“More people are Mediacom customers because of our broadband service than because of television,” Ms. Peters said. “They can get television a lot of ways – it’s just content over a pipe.”

Continuous improvement is one way Mediacom has won over followers.

The New Jersey-based company has boosted its Internet speeds seven times, from 1.5 megabits per second (Mbps) in 2002 to 150 Mbps today, with speeds reaching as high as 305 Mbps in Cedar Rapids. Those improvements have been made as the cost per unit of bandwidth has declined.

Another example of Mediacom’s commitment to leveraging the Internet is its MediacomConnect mobile app. On a given day, it may be used by 60,000 customers to remotely check for outages, resolve basic service problems, order service visits, monitor bandwidth consumption, check pending charges and perform other interactions that once required a phone call, Ms. Peters said.

The app won a Cablefax Tech Award, and is constantly being improved to make it more useful and intuitive to operate, Ms. Peters said.

By some estimates, Ms. Peters said the number of connected devices will grow to between 200 and 300 within the next decade. Much of the growth will be driven by adoption of home products such as thermostats, lighting and security systems that connect to the Internet.

Mediacom launched its home security and home automation services several years ago, and they are now a fast-growing area of the businesss. Home security systems can be programmed to monitor and alert owners by text or photograph of specific events, such as doors or windows opening when they are away.

Home automation services can be used to do things like reducing the home’s temperature to save energy while away in the winter and turning on lights or a television in the owner’s absence to create the appearance that someone is at home.

“Since launching home automation/home security we’ve added more features and we keep coming up with more bells and whistles,” Ms. Peters said. “Lately, we’ve launched a door lock system, so you can unlock doors from your smartphone.”

Mediacom’s win in the video production category reflects the large amount of local video content that is originated by Mediacom’s local MC22 channel.

Although some people think of MC22 as a public access channel, Ms. Peters said it reaches well beyond such conventional fare as airing public meetings to include talk shows like “Resiliency Matters” with community resiliency expert Mollie Marti, community parades and festivals, and sporting events such as Cedar Rapids Kernels baseball. The channel also helps to give local Mediacom viewers a connection to other Iowa attractions, by airing productions of events including Pella’s Tulip Festival and My Waterloo Days.

Mediacom’s philanthropic endeavors are as varied as its service offerings. Ms. Peters said Mediacom is the only company in Iowa supporting Shoes That Fit, a charity that works to get donations of boots, winter coats and jeans to school children in need during the fall. It’s been supporting the program for 12 years. The company also provides specially tailored philanthropy in certain markets, such as a grant program intended to enrich the offerings of local cultural and arts groups in Des Moines, and is a frequent partner on local events, including the Freedom Festival and the Downtown Farmers Market in Cedar Rapids.

Mediacom also offers more than 50 scholarships of $1,000 each to graduating high school seniors each year across its markets, awarding them based on the recommendations of school officials for the students’ leadership and achievement.

As company leaders look to the future, one of the biggest challenges Mediacom will have to overcome is something most of its customers take for granted.

“Our network is very different than a Comcast or Time Warner,” Ms. Peters said. “We’re not in a New York or a Chicago. Homes are spread out and density is not present. It’s more of a challenge because we’re in a less-dense area.”

A crisis in ‘all corners of the state’

Join us for the Mid-Year Economic Review on June 22nd from 11:45am – 1:15pm at The Hotel at Kirkwood Center. Click here to register. Sponsored by: Bankers Trust, CLA, JetAir, Modern, Travero, Iowa ABI, MidAmerican Energy and Stategic Financial Solutions.